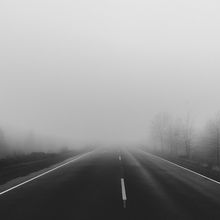 I find myself keeping rather quiet these days. Not hard to do, as I am by nature not very talkative. (In another time and place, I could see myself taking a vow of silence, easily.) Back when I was single, I'd easily go an entire day without saying a word aloud.

It's been eight years now since Grandma moved back in. She couldn't live alone after Grandpa died. And, after all, this is her house. She allows us to share with her, not the other way around. And I have been talking a lot more in these eight years than in probably the thirty years previous.

Grandma's a very chatty, social person.  She seems to really dislike silence, always has her TV on and usually the radio in her bathroom as well. But the voice she seems to like best is her own. There's no conversation she won't jump into. No topic she won't voice an opinion on (even politics, and she doesn't vote. It's against her religion) Talking with her can be exhausting. She interrupts constantly. I've gotten in the habit of just shutting up when this happens. I don't think she even notices.

For eight years I made a good effort to respond to the chatter about things that make my head feel like it's gonna explode. Celebrity gossip, reality TV (medical and courtroom shows are her favorites), illness, preferably her own, but yours will do in a pinch. How the world is just terrible and getting worse by the day. I learned early on that she doesn't really want to discuss possible solutions. She just enjoys the misery-fed pity party. And I know it's not just me. She'll talk to anyone this way. The poor cashier at Safeway doesn't stand a chance. She's a captive audience, until I'm able to convince Grandma that we must be on our way. She'd just go on talking, and I'd nod my (aching) head and go, "oh, um" as needed.

But now I just can't seem to be bothered to make even that much effort. I'm exhausted. And hurting. And, somehow, I just can't seem to get past that response she made when I broke down and wept. Wept for my mother, for myself. (You need to calm down, honey! I need you to drive me to Walmart!) Somehow, no matter what happens or to whom, she can always find a way to make it all about her. Every single damn time.

She's 96 years old, and it's very unlikely that her habits will change. I'm her granddaughter, and it's not my job, or my place, to try to convince her to change. The only one I can change is myself. I still haven't figured out how to accomplish this. Not this time.

I do still love her. In her own way, I'm sure that she loves me. But there's a distance between us now, that wasn't there before. What makes me sad is, I'm not really much inclined to worry about fixing it.

It is completely understandable that you would feel tired. Eight years is such a very long time, even when relationships are perfect. I support you in taking time away emotionally. I send you love and concern today.

I keep thinking about this issue...and a thought occurred to me that has simply blown my mind. (Granted, that's not so hard to do these days) \r\n\r\nWhile my Mom and my grandmother were always of very different temperament- Mom was a rather angry, bitter person, while Grandma is generally cheerful- they both had the quality of being extremely self-absorbed. Selfish, demanding, unsympathetic to the feelings of others.\r\n\r\nMy Dad married a woman who was in fact very like \"the girl who married dear old Dad\"!

Oh Desiree, I can feel your pain and grief and exhaustion as I read your words. It is such a heavy load you have right now. It seems to me, the one person who might share in that same grief, is unable to, and worse yet, not even able to acknowledge yours. It feels just awful when a loved one is so dismissive of you, of you, who has been there for her! \r\n\r\nI totally understand that exhaustion of being drained by family member when it is always ALL about THEM! There is no let up.... when it would do you a world of good for just one brief moment of understanding, a gentle touch, a knowing look that acknowledges your pain... but instead you get kicked.\r\n\r\nIt is sad. Hugs.

Most people apparently do not like silence.... but you and I are not most people :-) Silence is so peaceful. Hope you'll have a good day today, Desiree.