Down the Yellow Brick Road

Down the Yellow Brick Road

0
(Editor's Note: We welcome Goldie, who just joined us last night, to our blogging team. You can connect with her on her profile page: @terri.)

It's mid December, 2014, and I know this post won't be published for awhile, but I still have to write. Otherwise I'll forget the fun stories and crazy things that are happening and have happened as we make our way down the yellow brick road which is my journey with my parents as they discover the challenges of old age. I don't want those challenges and the frustrations which accompany them to be my memory of this time. This will be my record of the other stuff.

I'll have to back up a bit, too, as this journey began some years ago. When does someone start getting old? With my parents, it was hard to tell. My dad has always been just dad. Until the last few years, he's seemed neither young nor old to me. Just dad: The guy who wore bolo ties to work when we lived in Wyoming. The guy who made us kids jump when he suddenly yelled "OUCH" as he carved the Thanksgiving turkey. The guy who wrote down all our names on a checklist when we were teens and out late at night, then got up anyway when he heard the door open, just to make sure we were okay. And the guy who ate peanut butter and butter sandwiches for lunch.

Mom was a different story. By the time I was in high school, I felt like I was older than she was. I've always thought of her as 15 going on 85. Now she is 85, I think of her as 85 going on 15. Mom liked the popular music, popular clothes (except what I chose to wear), popular hairstyles, and daytime television. At a recent sing-a-long at their assisted living apartments, she complained about the choice of songs. "Those old ones are okay, I guess," she frowned, "but why can't they have some Bon Jovi?"

Looking back, things started to change for Mom in the mid to late 80's. She was having more and more anxiety and didn't like leaving the house. My sister and I tried to figure out what was going on and I think we suggested counselling more than once. It would be 25 years before we learned the reason for her emotional turmoil. That story comes later. At the time, we just chalked it up to Mom being her usual weird self and eventually we ignored her. I think this is what she wanted... sort of.

In the fall of 2009, I realized Mom was getting some things terribly mixed up. She would scold Dad for not doing something he had just done. Never a great housekeeper, I began to notice piles of clothes up and down the hallway. When I asked if I could help put them away, Mom responded with an angry and emphatic NO.

Then Dad complained. Whoa. Dad never, ever complained. His response when we asked how he was doing, inevitably was "Oh, just peachy keen". If he was complaining, God only knew what he had been putting up with and for how long. I started looking more closely. I went down the hallway with the piles of clothes and I opened their bedroom door.

Oh. My. God. There were more piles of clothes all over the bedroom floor, as high as the bed, and there wasn't even room for a pathway from one side of the room to the other. Thankfully, there were two doors into the room or Dad would have gotten stuck in there long ago. All the clothes were my mom's. Where did they all come from?

I have since learned there are ways one is supposed to talk to a hoarder, if one is determined to help them get rid of things. I have also learned if you make a mistake, even once, in how you talk to a hoarder, if you have even an infinitesimally small judgmental tone in your voice, you lose their trust forever.Saying, "MOM, you've got enough clothes to clothe an entire third world country!" wasn't among the approved phrases to use.

I distracted Mom while our daughter took box after box of clothes to our car. I had to at least get out enough to make a pathway. I took the clothes home, promising to wash and fold them all. I went through them at home and counted over 200 pairs of shorts and over 400 shirts. And this was just what was on the floor. We didn't open one drawer or closet. Two days later, Dad called. I needed to bring the clothes back immediately. Mom was going into panic attacks about them.

So I did. It was my initiation into what was to become our new normal - normal being a truly subjective word here. As always, Dad was the one who put things in perspective for me.

"Terri," he said, shaking his head, "sometimes it's really, really hard." Then he grinned and his eyes twinkled mischievously as he added, "I don't think we're in Kansas anymore."

We were on the yellow brick road and who knew what experiences we would have in the years to come. 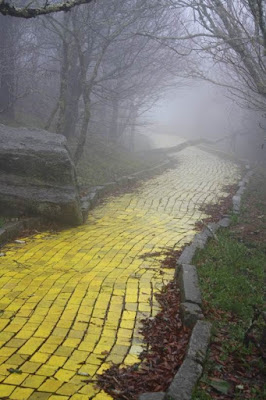