Dreaming of a Cure for the Sniffles

Dreaming of a Cure for the Sniffles 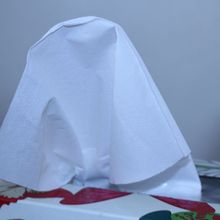 My dad has allergies. I'm no allergist, but I would say the allergies are severe. They aren't seasonal because they make it through winter. His allergies weren't phased by last winter's severe cold and constant snow. They showed up just like a pollen-filled spring day.

He treats his constant congestion by sniffing. He sniffles (sometimes snorts) consistently throughout the day. When he's not sniveling, he's loudly blowing his nose like he's playing the horn or sneezing.The force of his sneezes seem to move the house and my wig and my dentures, if I wore them.

I do not like all this sniffling. I haven't liked it for the past 52 years, the length of my life. I do not like to listen to the sniffles while I'm eating and pretending not to hear that he's talking with food in his mouth or that he chews with his mouth open. But, that's a topic for another post.

Over the years, I've offered suggestions like, "You'll feel better if you take care of your allergies. It's not good to keep sniffling that back up."

Whatever the suggestion, the reply remains the same. "I don't like how that stuff dries up my nose," he'll say.

So, he's tried nothing to help his allergies but confident that anything won't work.

Yesterday, I couldn't help but think: Maybe now I'll be able to get some Zyrtec in him. Maybe a window will open that will allow Zyrtec to climb in.

I dream of a cure of the sniffles which, given all his problems, is quite shallow of me. His sniffles, which drive me nuts and give me the heeby-jeebies, are the least of his problems.

But, I still would love to get some Zyrtec in him.

The post-nasal drip of the constant sniffler. That's how Yvonne wound up with pneumonia...though she'd never admit it.

I am with you 100%!!! I can't stand sniffles, snorts and gags from allergies, especially when there are treatments!! My boss at work did that all day every day for 2 years and then went in for allergy shots. My AwesomeHubby has begun to use the saline rinse regularly which has made a huge difference. It's like the netti pot but with the more masculine bottle. Maybe you can slip some Zyrtec into his pill box??

It is hard not to be bothered by this kind of thing (Mom will talk with a mouth full of food. . . I have to look away) and impossible to comment on, or for me it is. At least to say, this behavior disgusts me. Would he try a neti pot? I know a few older men who prefer that self-treatment to taking allergy meds.