My partner and I both seem to be sleeping better these days, which is a blessing.

Our days are calmer. Sometimes she has tears, but she has discovered that it is possible to cry and then stop crying. Her tears do not go on forever and ever.

This release has been coming for a long, long time. Decades.

We move forward together through her theories and correlations. I wish I weren't having such a hard time with them, but they often leave me emotionally exhausted.

Like when she tells me that she has figured out that PLU means "post lock-up," because she had been "imprisoned" in the hospital in 1982, when they gave her the "brain surgery" that gave her MS. She relates PLU to the "People Like Us" sign she had seen someone holding up years ago at a Gay Pride rally. As in: If you don't fit into society, you get locked up.

Or that the "S" in "MS" means "shunt," because her CT scan X-ray "brain surgery" had created a shunt in her brain to help relieve her hydrocephalus. And that the "M" must stand for "medial" because of her thinned corpus callosum in the medial part of her brain.

It makes me dizzy.

She asks me to repeat her theories back to her, to show that I have understood them correctly. She asks me what emotions I feel about what she tells me.

At times like that, all I want to do is sleep.

I preface my answers with, "I understand that you believe that..." and provide a brief synopsis, because I have a hard time keeping track of it all. Every day she finds a new connection or series of connections, and she discourses at length about them.

I say I feel thankful that she is working things out.

But sometimes I want to scream. After about an hour of her theories I try to beg off for a while. I tell her I am saturated with what she's told me. I concentrate on my breathing, on keeping calm. I remind myself that there's a reason for all the delusions -- the big AMA "cover up" about how people who were abused as children are "given" MS to help them adjust to society -- even CIA involvement because her alma mater had done work for the DoD. The hidden meanings she finds in song lyrics. Things she's sure the neurologist told her that I don't recall hearing at all -- as when he "told" her that men with her history go to prison and women with her history get MS.

There is an urgency to what she tells me in her pressured speech. There are "Eureka!" moments. Revelations from as soon as I awaken to the time I go to bed, day after day.

And because she knows that I respect her beliefs but do not share them, she asks me, "What would it take" for me to believe?

I tell her that evidence in her medical records would go a long way.

I tell her a story of when I had been in therapy as a teenager. How, when I couldn't reach some deep vulnerable part of me, I'd heard music playing in my head. That music had been a wall, filling my head with sound and hiding the threatening material that lay behind it. Try as hard as I might, I could not make the music go away.

I think of her theories and correlations as a kind of wall -- and that the mortar holding its bricks together comes from her actual neurological damage.

I tell myself: It's words. It's her process. Why does it upset me so much?

Helping her through her (now discontinued) foot soaks, driving her to doctor appointments, and taking her on long hauls for tests and specialists -- even following her ever-changing rules to accommodate her various sensitivities -- seem easy compared to this. Those have a directionality to them. They form dots on the line between Point A and Point B -- wherever Point B is.

I keep faith that her delusions -- her wall -- also has a directionality to it. I believe her improved sleep is a sign that this is the case. But her hours of conspiracy theories and connections made from who-knows-where feel to me like tires spinning in the mud. She undergoes catharsis over things that (as I see it) aren't real.

I remind myself that reality is not the point. Her catharsis is the point.

Intellectually I can accept that, but emotionally I have a hard time with it, and I don't know why. All that is required of me is that I sit and listen, really, with an occasional question or response. All I need to be is a support and a sounding board. Let her express what she needs to express.

All I can do is give my partner the time and safe space to weave her many connections, and hope that some emotional healing is occurring behind her wall. We move forward together through a dreamscape while we are awake.

And then I sleep, escaping for a while my own vertigo. 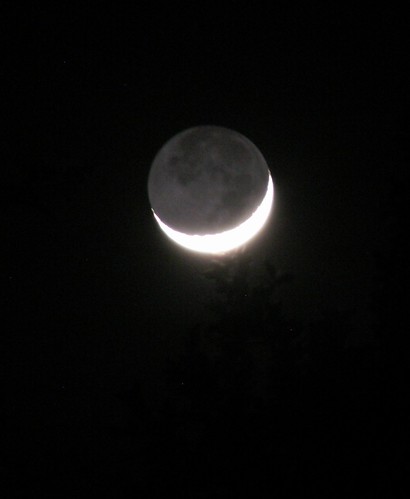 Waxing crescent Moon with Earthshine on Dec. 15, 2012. The crescent illluminates leaves that it is about to go behind.