Dress 'Em Up, But You Can't Take 'Em Out

Dress 'Em Up, But You Can't Take 'Em Out

jan
So...life with my mother following her 20-day temporary stay in an assisted living facility...

She's been home a week and certainly we are making progress. First, she raced into the house and immediately began wiping the kitchen counters with a rag and scoping the linoleum for dirt. I considered that a positive sign. Then she fell into a deep sleep and her pee soaked everything, including two bed pillows. I didn't know it was possible to pee that much but if the human body is 80% water, and she's 90 pounds, that's 72 pounds of water. Yeah, that's about right. I had to cut her underwear off with kitchen shears.

Overall, Stella Has Her Groove Back; two days ago I was on the phone to India about my broken laptop; four different technical experts tried diligently to help me until the connections were broken, all the while my mother was in my face jabbering incoherently so I couldn't hear their vital instructions. Then she was sitting in the middle of the kitchen floor, shoes off, getting all the pots and pans out, next comes the food from the refrigerator; I see macaroni and cheese, butter, a beer and some Kahlua White Russians on the counter but they're too far from the phone to reach! Drat! While on hold with "Ali" (or was it "William" or "Mac"?) I leaped up and pulled the plugs out of all the appliances before she set the tea towels on fire in the toaster oven. It reminded me of when my daughter was little and my first solo attempt at a Thanksgiving turkey; it was frozen solid and I was defrosting it with a hairdryer while she was emptying an entire box of cheerios, one by one, into the trash can from her high chair. My daughter was more amenable to my being preoccupied.

A trip to the Walmart reminded me of how my mother is like a tin soldier that you wind up and its feet are moving before they hit the floor. She gets behind the cart and then just pushes, with this straight-backed purposeless energy. Don't dally about deciding which bunch of bananas you want, the ones that are green or the ones with the spots...or she and the cart disappear down the aisle. She needs one of those K-Mart Blue Light Special poles attached to the cart. Maybe I should make that suggestion with all the dementia residents here. Wouldn't that be a hoot to shop, with blue lights streaking overhead.  It would be like Asbury Park.

Yesterday we went to my daughter's house to see the new baby. True to form, my mother was ready to leave almost immediately, with whatever current wheels she has going in her head, going at top speed. I raced behind her with a floppy newborn in the crook of one arm and negotiating my mother with the other, trying not to snap Lillian's neck while keeping my mother and her childlike ambitions from reorganizing my daughter's kitchen or putting my credit cards in the trash. I let her empty my purse and wallet to keep her occupied but that wasn't enough. She put on my shoes, stuffed my socks in her bra, donned her panama hat and headed right out the front door.

Recently I read that in the course of dementia, either long-term or daily, there are ups and downs, connections and non-connections, activity and non-activity. It's all a shot in the dark and you're on your own, Pal. I found that very comforting somehow. I thought the course of the disease was straight downhill; it was helpful to know this, I'm not sure why. When my mother wakes up in the morning, she is as debilitated as a rag doll rejected from Goodwill, and getting her dressed is like putting a wet suit on Gumby.. By the afternoon I need roller skates to keep pace.

Either her facility stay was so awful, she's delighted to be back home, or the facility stay engaged her enough to keep her current energy levels up. Either way, we "WON". 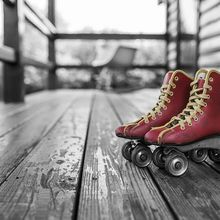 These details of your day that you share are gems!! I too so love your posts. You bring us right there, right next to you and then remind us of the gift of a sense of humor.

Jan\r\nYour posts are so great - I love your ever present sense of humor.\r\nI can only aspire to maintain mine in such a way, especially in difficult moments.\r\nYou are truly an inspiration to me!

It's funny, I was just thinking to ask you in a private message how you manage grocery shopping, and then I read this. Although these pictures of dementia freak me out, your attitude is encouraging. You make it sound doable and survivable. I hope I'll fare as well if we reach that point. Do you get any help at all?

Jan, I so enjoy your posts. Your words paint such a vivid picture of the \"adventures in dementia.\" I hope you get as much relief from blogging here as we readers get--both in some comic relief, and lessons in the live of dealing with dementia. Thank you.

You made me chuckle but I so get it. I went that route with my dad. Unfortunately, my dad's favorite place to be was in the middle of the street, in the middle of the night with a waterhose and a spray nozzle, sometimes the lawnmower and a chainsaw. I'm keeping you in my prayers.