Drop Kick Me, Jesus, Though the Goal Posts Of Life

Drop Kick Me, Jesus, Though the Goal Posts Of Life

0
Last weekend I got out my watercolor paints. This represents a watershed moment for me.

My painting is a little like having dessert after dinner, or sex: you only get it when everything else has been taken care of.

So this represents my mental state after my mother's passing in August. Almost three months have passed. Some things, like the sale of my mother's house and my finding an apartment, were wrapped in serendipity and seemed effortless. Other things, like obtaining a refund of her pre-paid room rent at the caregiving facility, or a timely transfer of her investment account to my sister and me (established as "TOD", transfer on death, so I don't know what else they were waiting on) became complete bureaucratic nightmares. As I look back on those, I wonder if I had just stepped back and let time pass, if they would have resolved on their own without my expending just so much freaking negative energy. My guess is that her money would still be nestled "on the books" somewhere and easily overlooked in an audit. At any rate, I am finally now done with rushing the football down the field toward the goal line. It feels good.

The crappy parts were often offset with the remarkable finds while sorting my mother's belongings.

I've blogged about the photo album full of pictures of my mother's first boyfriend, and finding his family and returning the photos to them. Last night I received a photo of this gentleman's son who I've been corresponding with all this time. What an amazing journey it has been to come full circle. I feel as if I'm being reunited with long-lost family.

I also found the birthday card my father sent to my mother from "Baby"; my mother's birthday is on July 21 and my sister's birthday is July 23. This was so thoughtful and sweet back when you didn't know the sex of anybody, and they didn't know how long it would be before Baby showed up.

I found a hand-crafted personalized get-well card for my father, who was in the hospital in 1968. It was from our next door neighbor, Al Kaufman, who was an artist and cartoonist for The New Yorker. That's probably worth something.

While cleaning out an old dresser, I found a drawer lined with the Palm Beach Post,  printed the weekend my husband and I had our first date, Nov. 19, 1972, 43 years ago. It gives a glimpse of what life was like in the Palm Beaches right then. I doubt my mother did it intentionally. At that point she was chastising me, "You're 17. You need to learn to drive. David won't be driving you around all your life." That's hilarious, actually, because after 43 years, he still does almost all of the driving.

In addition to these is the signature of John Wayne, my mother's favorite actor when she was a teenager. Looking at this, really rips away all the years. I think she had good luck. I think, for the most part, she had a pretty good run.

Paint and ink on paper. What is left after a life, what becomes more than life. 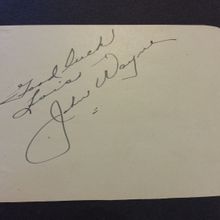 Jan, I'm sure you know the rest of the song, since you have that headline! My son put this one a compilation cd of all sorts of crazy songs and gave it to me when things were more than crazy. This song was written by Paul Craft and sung by Bobby Bare. Paul Craft was a good friend of Shel Silverstein, which explains some of this humor. https://www.youtube.com/watch?v=COfL-jtdFWQ\nOh.... and of course, your blog post is delightful! My sister is a watercolor painter and it is her therapy, too. It was finding the treasures like those you list that made the clean-up of my parents' house bearable. So glad you have all those treasures!\n\n

Hi Jan, I loved reading this post. Such wonderful treasures and memories to ponder... I love that it gives you more glimpses into your folks pasts. I got a peaceful feeling from reading this. I'm glad to hear you got out your watercolors. And I so totally relate to getting all tasks done before feeling entitled to some enjoyment and peace.

First, every time I read the blog's headline, I just giggle. :)\n\nI'm so grateful for these posts about life after caregiving ends. They are just marvelous. I love learning more about your mom, about you and about our life's treasures. I just find it interesting how much your mom lives through these posts. It's awesome. As are you.

Good for you, Jan, for getting out your watercolors and allowing yourself a \"dessert\" of sorts. You are setting a good example to the rest of us to allow ourselves some time to take a much-needed break. I also love that you so thoughtfully considered your mother's items as you cleaned out her home...sounds like you found some fantastic treasures!