ejourneys
Yesterday I participated in the last author event on my schedule, with nothing further planned. I announced to program participants and my fellow panelists that I am backing away to re-balance my energies, at least for now.

I had begun to cut back on my events and volunteer activities after I got POA for my partner in 2009, and each successive year I've cut back more. It has to do with more than the wear and tear of an extracurricular schedule. Quite the contrary; in the past, these events have rejuvenated me. Medical travel this year will probably be significantly less than it had been last year, so this is not a scheduling issue. (Next week I'll call to ask about setting up a follow-up MRI for later in the spring. That and the follow-up neurologist visit are 75 miles from home, but so far everything else is local.)

This latest cutting-back is different. As much as I've enjoyed these activities, I've had a harder and harder time maintaining my "game face" during them. Until 2009, I had kept my public self and my caregiver self completely separate. Then, little by little, I've broken through that wall, but maintaining even part of that wall had exhausted me emotionally.

Back in 2007 I had brought my partner to a convention because she wanted to go. By that time I had been supporting her fulltime for six years, but I had not yet realized fully that I was her caregiver. That realization was slow to come because she kept insisting she was okay.

Unlike my usual early-bird timing, we ended up leaving for the convention four hours later than planned, because of how long my partner took to pack. She had stuffed the car to its gills with cooking pots (not for cooking; she wanted to use them to carry things), closed-cell foam pads, bedding, numerous freeze-dried camping foods, and clothing for all seasons. We kept having to make stops on the road, either for her bathroom breaks or because she wanted to stop for fast food.

My partner's difficulty traveling had partly to do with the cysts and fibroids that would lead to her hysterectomy in 2009, the reason I was finally able to get POA. But in 2007 we (and her GP and ob-gyn) were still unaware of her condition.

What was normally a 90-minute drive had taken almost five hours, and we finally reached our hotel room around 3 a.m. -- complete with incredulous stares as we overloaded our cart. We looked ready to stay for a month, not a weekend.

My partner didn't like the hotel bedding. She took the closed-cell foam pads and bedding brought from home and slept in the bathtub. She kept complaining about the thermostat. She had strewn her belongings all over the room. If she got hungry in the middle of the night, she ate from her cache of camp food. She jogged in place on the foam pads, also in the middle of the night.

I got almost no sleep that weekend. I wore my "game face" as best I could, while being on and moderating panels and staffing a sales table as a professional guest of the conference.

The convention topics were of interest to both of us, but my partner attended just one panel (separate from the ones I was on). The rest of the time she either slept in our room or patrolled the hotel's stairways, picking up every discarded newspaper she could find so that we could pack those papers in the car and bring them home with us to recycle.

During this period, she still insisted she needed no help. As a passenger she startled easily. She unbuckled her seat belt in the middle of the highway so that she could climb over her chair to get something from the back seat. She kept fiddling with the dashboard controls. When she didn't like the way the windshield looked, she reached over without warning and squirted wiper fluid. I was a wreck by the time we got home.

She said she had enjoyed the convention, but I didn't bring her to another one. Most of my events were local, but on occasion I traveled, keeping in frequent contact with her by cell phone. She was supportive of my activities, but I felt torn. Once I got POA and could start getting a team of doctors together, travel to specialists replaced travel to all but a couple of conferences.

My partner is a much better passenger now (and I'm much better at tuning more out as I drive), but travel still gets dicey on occasion. The more she comes to grips with her diagnosis, the more she pays attention to her own behavior. She is better at recognizing her limitations. We discuss a lot more of the details -- rest, nutrition, environment -- and focus more on how we feel emotionally.

Due to a therapist error about a year ago (I wrote about it in my first blog entry here), my partner and I had experienced what we call Hell Month. Her functionality had plummeted, she did a lot of acting out, and I was trying to cope and get advice from my lawyer and the local sheriff's office. All it took was for someone to ask me, "How are you?" at a local workshop last year and my water works started. (At that time I was also caregiver to a friend who had spent time in a nursing home after a fall had broken her arm, but we were also each other's sounding boards. That helped.)

Two years of my own therapy have helped me detach from and respond better to my partner's behavior. I believe we have both gotten stronger in the long run as a result of weathering the trauma from her therapist's error. (I like to think that's a silver lining to something that shouldn't have happened.)

Over the past couple of years I've talked about our situation to several people at the events I've done. That helps, but it's not enough. In one way or another, the events require me to perform. I am at a point where I need to withdraw from being "on" and enter a quieter place.

When I listened to Denise's Cabin Fever webinar, I realized that I am embracing the cabin. Rather than fighting against my world getting smaller, I'm letting myself shrink along with it.

What I've experienced over this past week looks like depression, but it doesn't feel like depression. It is a relinquishment. I have felt a complete lack of motivation and very low energy, but I've been okay with that. Sad, but okay. Now that yesterday's event is over, I feel a sense of relief and my energy has rebounded.

"Reversed, this Rune calls for giving up gladly the old, and being prepared to live for a time empty: it calls for developing inner stability -- not being seduced by the momentum of old ways while waiting for the new to become illuminated in its proper time." -- Ralph Blum, The Book of Runes (from the rune Kano: Opening)

I've been thinking of that quote lately.

Conditions are much different now than they had been in 2007, 2009, or even last year. My partner and I are both more at peace. We are more attuned to each other. I'm sticking more to photography's simple joys, which we can share much more easily. I've been writing daily haiku as part of NaHaiWriMo (National Haiku Writing Month had occurred in February, but the community writes year-round).

My partner asks if I am backing away from events to give myself more writing time. I don't know. I am just stepping back so that my energies can do the shifting they need to do, however they need to do it. I am integrating my sense of self with our current situation, thankful that I can do my freelance work at home.

I spoke with a couple of my fellow panelists after yesterday's event, saying that I'd be interested in the occasional get-together just to shoot the breeze. They liked that idea, because their get-togethers have generally been work meetings.

Their willingness heartens me. I very seldom hang out with people to just be, so maybe something like that can be good for all of us.

I pointed another panelist to this site and will send her an email, because someone close to her is also a caregiver and isolated. "He doesn't think of himself as a caregiver," she told me.

I've been there. (That will likely be the topic of another post.)

Back on March 25, I convinced my partner to come outside to view the arrangement of Venus, Jupiter, and the Moon. It took a little persuading, but pretty soon she was studying them in her binoculars. 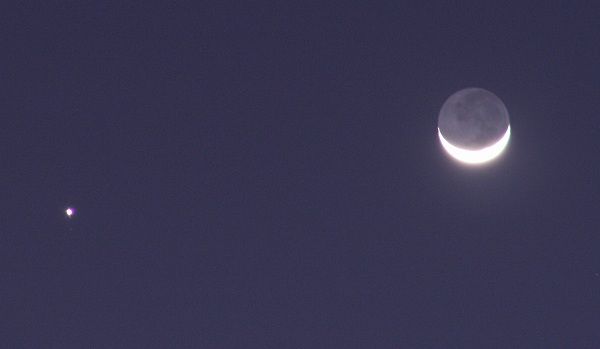 Here the Moon (with Earthshine) is beside Jupiter on the 25th. 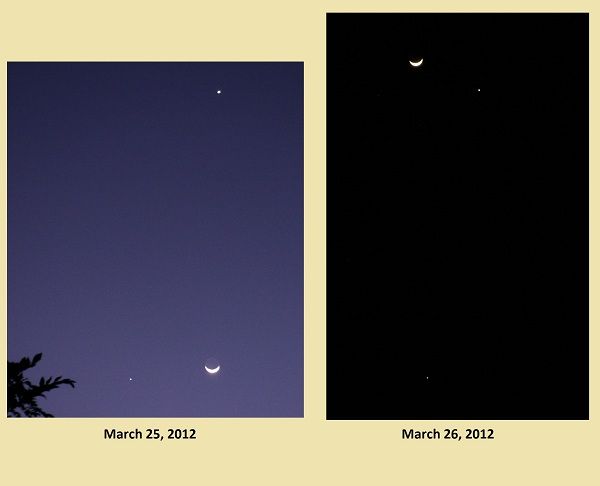 By the 26th the Moon had moved up to where Venus was. On that night my partner came outside on her own and spoke with a neighbor while I took photos.

On the 27th we returned to the park with its sandhill cranes. I had left my tripod at home, but managed to take these shots freehand: 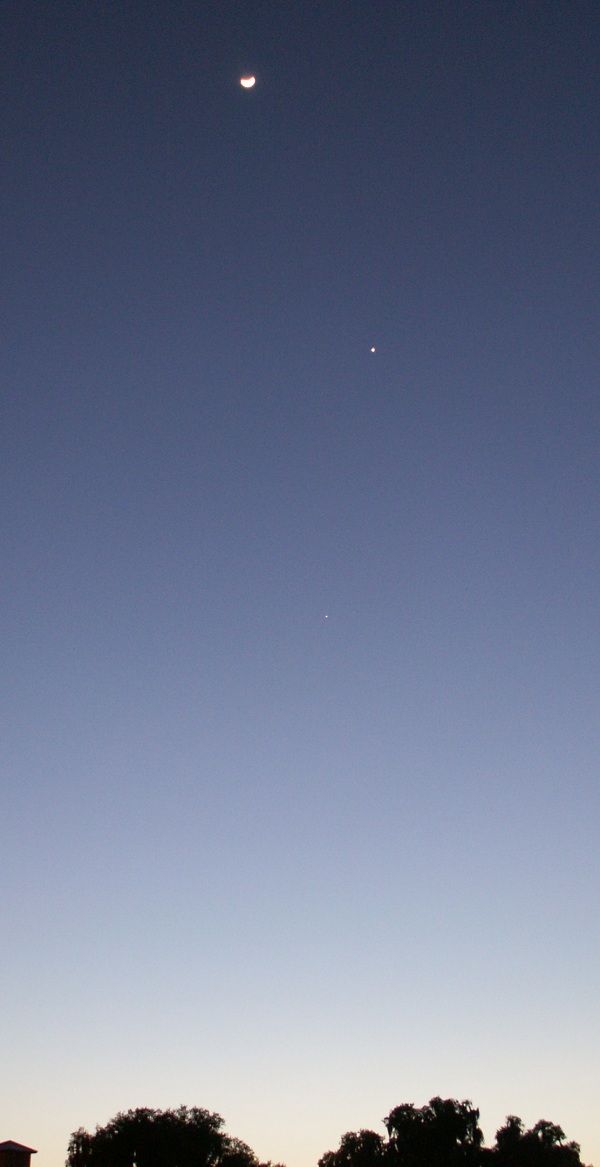 Jupiter is a faint dot about halfway down the photo. Venus is above it and to the right. By this time the Moon had traveled farther and is now above and to the left of Venus. (The Moon looks fatter than its actual phase because I've taken a longer exposure.) 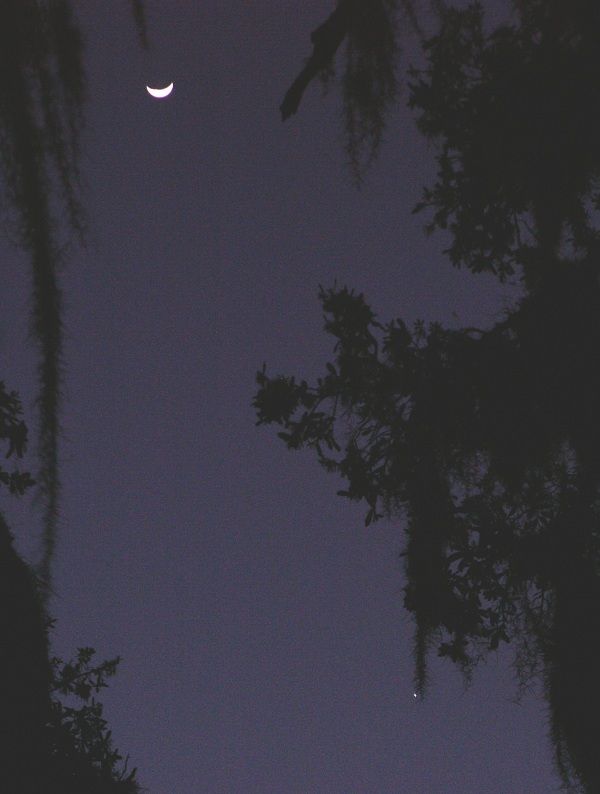 Venus is the bright dot near the bottom, beside a hanging finger of Spanish moss.

On Friday, my partner finally agreed to go in for blood work; her GP had given her the order back on January 6. She wasn't against having her regular blood panel done. She just didn't think she could fast for eight hours, because now she thinks the fasting could have a bad effect on her cerebral spinal fluid and hydrocephalus -- now that she knows there are abnormalities in her CSF.

She doesn't have any medical conditions that would make a delay dangerous, so I didn't push the matter. I suggested that if she really had problems with the fasting, she could call the lab and ask their advice. Finally, she just decided to tough it out. The results should be ready for me to pick up within the week.