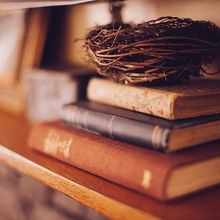 When I was in grade school, I had very few friends. Other kids thought I was weird. Adults found me off-putting. The kindest remark I ever heard from them was that I was shy. The unkindest comments, I won't share with anyone.

Things didn't get much better when I entered high school. I was still weird, and shy, but now I was also stuck-up, too full of myself, and a "social imbecile". I'd always choose a good book over a keg party. Noisy crowds made me ill. Stuff other kids liked, I found unbearable.

I first heard the term "empath" when I was about 24 years old. At that time (30 years ago or so), it seemed to be a pejorative term, used to describe a social imbecile who just needed to stop being so damn sensitive, grow a thicker skin, and stop being so self-absorbed.


These days, the condition of being an empath is no longer considered to be some kind of terrible defect. It can even be a strength. It's also recognized as a prime reason why some people are naturally introverted. Introversion is an unconscious, natural defense mechanism against feeling overwhelmed by the emotional state or "vibes,"  "energy", whatever, of other people. Because an empath is so strongly in tune with the feelings -- emotional and physical -- of everyone around them. It's why loud, noisy parties and brightly lit, crowded stores can be such torture for some of us. Even things like TV and movies can have a strong, often negative, impact on us. Entertainment that very many people enjoy is not only distasteful, it's enough to make you ill. Literally.

But that same trait, which some still consider a minor character flaw, is something that can be a real asset. Empaths are known for their ability to sense the unspoken needs and feelings of others. They tend to be great listeners, and frequently have total strangers tell them all sorts of things. (This happens to me a lot!) Maybe because, on some deep, subconscious level, others sense that we will understand them. Which is often quite true.

But the trait that can make one a terrific caregiver, can also make caregiving plain torture at times. Because the one thing an empath really needs, and desperately misses, is a bit of solitude. I don't know about you, but I have to get out of the house, sometimes drive away somewhere, just to get a few minutes of quiet time alone. Because at home, there is always, always someone else there. And that someone else isn't likely to let me alone. Not unless I lock my bedroom door and hide. Sometimes not even then.

A sad irony. The one little thing I most need, in order to be happy, and peaceful, and better in my role as a caregiver, is the one thing I'm least likely to get.

At least nobody calls me stuck-up anymore. Weird, yeah. I still get that once in a while.