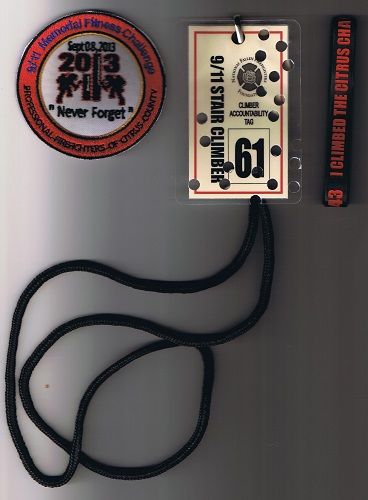 On September 8 I participated in our local hospital's 9/11 Memorial Fitness Challenge.

Online registration closed the preceding Friday night, tying me for the sixth-oldest participant in a field of 116. Twenty-eight more people registered at the door, though I don't know what their ages were.

My partner was sleeping when I took off at around 6:30 in the morning. Before leaving home I had a fabulous breakfast of 1/2 cup dry old-fashioned oatmeal mixed with 1 cup water, plus 1/2 cup raisins, 1/2 cup walnuts, and a banana. Smush everything together in a bowl, microwave for 5 minutes. Heaven!

It felt good to drive to the hospital without it being an emergency. The last time I'd watched the sun come up was when we'd been in the ER back in June.

This time the mood was festive. Tents were erected in the parking lot, and a fire truck extended its ladder to hold an enormous flag. 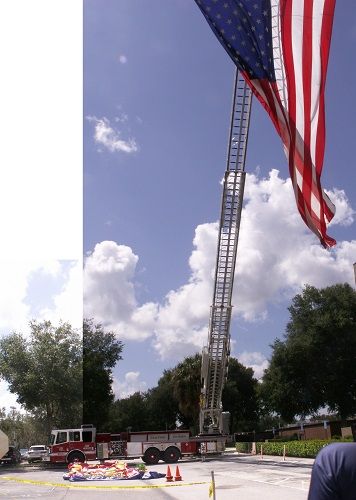 As I wrote in this entry, the fitness challenge benefits the National Fallen Firefighter Foundation: "Participants in this grueling fitness challenge are tasked with climbing 110 flights of stairs to symbolize the floors in the World Trade Center Towers. Many firefighters who participate will have the added challenge of completing the climb in full bunker gear and air packs." 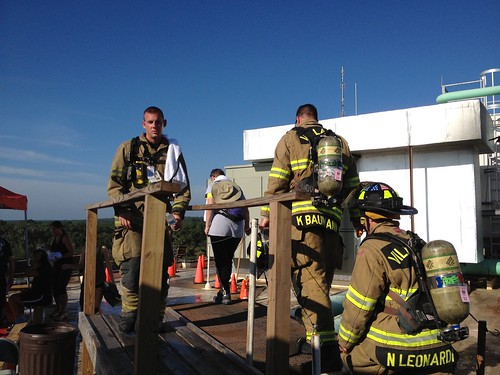 Photo was taken by hospital staff during one of many roof crossings. I'm the one not in uniform, with my back and floppy hat toward the camera. I'm also wearing a hospital-provided towel around my neck, which made my hat unnecessary. Underneath the hat is my Camelbak, which started out with 100 oz. of water.

Participants made ten climbs each of two stairwells on either end of the hospital, one with 85 steps and the other with 108 steps. (I counted -- wanted to be accurate in my reporting to VRide! :D ) The tag shown at top bears a hole punch for each climb. In addition to the Climber Accountability Tag, we each carried tags bearing the names and faces of the 343 firefighters who had died in the World Trade Center Towers on September 11, 2001. Every memorial tag got carried up those flights; I wore two of them.

We walked across the roof to get from one stairwell to the other, ascending one, descending the other, then turning around and doing the same in reverse. The roof contained rest stops with water and towels. The edge of one rest stop is visible on the left edge of the roof photo.

Ground level also included bananas, oranges, and energy bars, with added cookout food after the event. During rest stops I grabbed a couple of bananas at the site and ate one of the Clif bars stashed in my Camelbak -- which I drained down by about two thirds.

After about the eighth climb out of 20, I took a rest break after every climb. I wasn't in any hurry. Fans were deployed in the stairwells, which got hotter as the morning advanced. Volunteers kept track of everyone.

They also cleaned the stairs and bannisters, which became slick with all our sweat. We made the place smell like a locker room. :-) 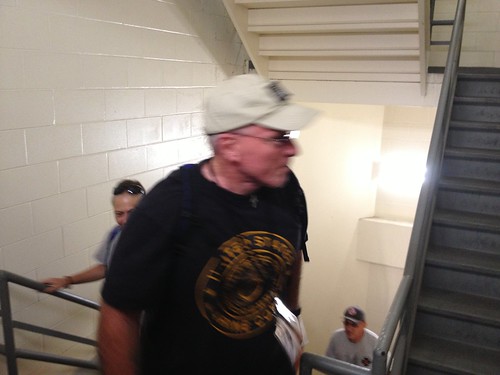 Hospital photo. I became really good friends with that bannister.

We also encouraged each other, calling out "Good job!" and "One step at a time!" and "Breathe!" The firefighters climbing in full gear were awesome.

By the last five climbs, lactic acid was making my calves act up something fierce. One firefighter and I had been calling greetings to each other as we passed each other on one stairwell or the other. After the final climb, he said, "Let's go down together."

I warned him the lactic acid was making me very slow. He said that was okay; he was slow, too. :-)

A large brass bell rested at ground level. Whenever someone finished a final climb, they rang the bell to cheers from the crowd. It was neat to hear that bell echoing through the stairwell, and especially sweet to ring it, myself. I completed the climb in about 2.75 hours.

Then I hobbled inside the hospital and straight to the laboratory. When my partner had her blood work done days earlier, I learned that I could pick up her results from the lab if the records office were closed -- which it was, on a Sunday. I showed up at the lab plastered with sweat, and fished from my Camelbak the POA papers that I had also carried up and down those flights with me.

My partner's results are fine. :-)

Then I dove for one of the five remaining burgers at the cookout because my body was screaming for protein. After eating, I took advantage of (and was very thankful for) the volunteer massage team at the event, because my calves and quads were just screaming, period.

On hearing how old I am, the woman at the hospital's information desk told me that she really had enjoyed her 50s, because she finally had a chance to travel and do all sorts of things. I told her I'm especially thankful that I could do some of that when I was younger. Then I told her about Caregiving.com and a bit about my situation.

I left as the huge flag was being lowered and drove to the natural foods store (on the way home) to pick up our order. The staff member I spoke with wants to do the event next year. :-)

A half hour later I got home and fell into bed.

Almost a week later my right leg feels completely back up to snuff (thank you, bannister!) and my left leg is almost there. As tired and as hurting as I was, especially near the end, I was still thrilled that I could do this. The firefighters around me in full gear were simply inspirational as they fought through their own pain and fatigue. I was also inspired by the two tags I carried in memory of fallen first responders, one of whom coincidentally shared my partner's surname. 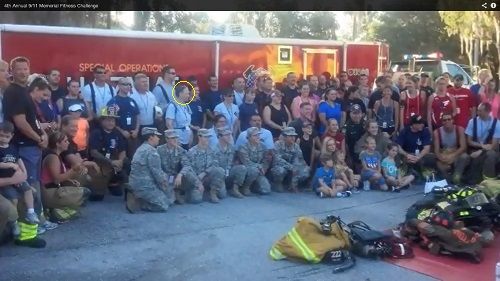 Group shot taken before the climb. This appears about 33 seconds into the hospital's video of the event. I've circled my head in yellow in this screen cap.

Thanks, everyone! :D I hope to do it again next year!

This is just amazingly awesome. What a wonderful, wonderful accomplishment. You continue to inspire us all to reach new heights. :)

I am very impressed that you did this! Way to go!!\r\nMaria

Wow, I can't wrap my head around climbing all those stairs. Kudos to you and to all the men and women who participated in the endeavor. You continue to be an inspiration for me. WHEW!