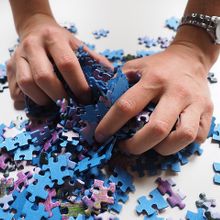 Oh lord...the antics continue. Today she's worried "the guy" is going to force Mom and SIL into prostitution. lol Mom's 64 and SIL looks 84. lol Whomever "the guy" is, he's an idiot and quite obviously I'm going to have to change the channel in her room! Haha She's always watched crime shows so I'd keep the tv on her shows. Looks like I'm putting on Nickelodeon,Law & Order SVU is out!

I hate to say it, but I think most of the falls are on purpose. She insists upon walking right now bent over, not a little bent over, but bent at the waist so far as if she's picking up stuff off the floor ( which she also does) when you tell her to stand straight she can and does. Of course when she falls everyone comes running to help her up and of course she's center of attention. Now I've told her hospice says if she doesn't stop falling I have to keep her in bed, rails up, or strapped in wheelchair so she doesn't bend at the waist head on knees. At first I thought she was trying to stretch her back but that position is VERY uncomfortable. And it's us, sit up straight, adjust pillows, put a pillow in her lap, pick up pillow cause she dropped it, put her back again. Over and over all day. She wants to get in her room, I settle her in comfortable and she's up three minutes later. Twenty minutes helping her to lay down, adjust pillows, get everything just so. Then again oh, I have too go to the bathroom. It's like the kid in the high chair dropping stuff over and over so you pick it up.

She won't sit still. She's up she's wanting this or that, she wants robe on or off, her soda is flat, not enough ice. She's talking and speaking clearly so it's not bad heptatic encephalopathy or she wouldn't be. Wasn't til I was talking to my friend and she said, It seems like she does things until you get fed up then she does something else. BIINGO! Ding ding ding. We want to help, we want whatever time she's got left to be the best possible but we need to have a life too.

I got fed up this morning. I said if you're settled in and have to go, you have to go in your diaper. I'm not doing this all day. Hmmmmm... not a peep. When I got her up she didn't even go. She doesn't need help when she wants to do something she's not supposed to. Oh no, then she walks and is across the house in two minutes flat when it usually takes 20. She's not cooped up in her room unless she wants her dogs in. She can be wherever she likes. We go talk to her about other stuff. I'd just left her after talking about dinner and what she'd like from the store and general B.S. It's not like she only gets attention when she does stuff.

Thanks for the read and letting me vent!

Yup. That's what I'm working on too. It's hard because she's on hospice but it has to stop. All she needs I don't mind, all she WANTS is a different story

<a href='http://www.caregiving.com/members/denise/' rel=\"nofollow\">@denise</a> yes, it's hard. I never know because I always think it's the illness. It isn't until it's pointed out to me then I call her on it THEN the behavior stops....THEN I know lol. If it was the illness and she couldn't help it, then it would continue. I was more fearing we'd have to keep her in bed or strapped to wheelchair, that would suck for her! And also if she keeps falling then what if hospice feels we can no longer care for her....then I may have to keep her strapped in anyway. She's not getting hurt during these falls Thank God, but one of these days she will. She also has osteoporosis.

Hi HSG--It's just hard to know when it's a disease process and when it's manipulation. \r\n\r\nARGH!\r\n\r\nI can tell how much SIL loves being a part of your family. I wonder if she worries that you guys will just some day go away--that it won't work out with your family just like it hasn't worked out for her in the past when she's tried to create a family. She must struggle with trusting this situation, trusting that it's permanent (as permanent as anything is in this life).\r\n\r\nWhat's for dinner? :)\r\n\r\nAgain, I'm just so grateful you share your days with us.