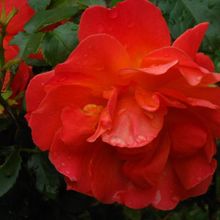 Such an upsetting night.

I was hanging out downstairs with Mom between 5 p.m. and 6 p.m., listening to her tell stories about her father's relatives, like the aunt who refused to bathe. Then I went upstairs to fix some leftovers for my son. I had brought her a chicken and rice dish I made for lunch and usually she just has one big meal a day and two small ones, so I asked if she had something for dinner. She said she was fine, she would make a bowl of cereal or a sandwich.

So I came upstairs, fed the boy and myself, and got to work on a freelance job. My son went downstairs around 8:00 and found Mom asleep in her chair and the dog licking a plastic food container. We'd gone out to dinner on Sunday and she brought home her pasta dish but wasn't planning to eat it because it made her sick that night. (I should have thrown it away, but I forgot!) Anthony came upstairs to say that she had eaten the food that made her sick but didn't remember. I spent another half hour finishing my job (I'd promised to finish by 9:00) and went downstairs to check on her.

I found her and my son together in her recliner, both crying. She was so upset. She couldn't believe that she had eaten the food that had made her sick, and she couldn't believe that she had given it to the dog because she never feeds her anything but treats. She said, she kept saying, "I don't know what's happening to me. I feel like I'm losing my mind." She was so so so scared. It was terrible.

My son and I both were trying to play detective. Our evidence was the empty container, no pasta in the garbage can, a bottle of Tums next to her chair, a fork in her wine glass. I suggested that maybe she had exceeded her normal two glasses of wine and that affected her judgment in getting the food and her memory of it afterward. (She has one or two a night "but they're very small and I only fill them up halfway"). I thought it might be easy to forget if she'd had one or two and pour a third or even a fourth and that that could definitely wipe the memory clear. We also thought maybe she had been sleepwalking. Or that she ate the food, gave the container to the dog to clean, and then just forgot. But none of the explanations made since to her.

I called my cousin's wife --the family we visited recently, the doctors who noticed her memory problems. She's very very loving and kind, and I knew that if she said, "It's nothing to worry about" it would be more comforting than if I said it. She suggested that it was just the memory trouble she is having--but this seemed different somehow. Mom often forgets conversations, but this action seemed very out of character--eating food she knew was bad or giving table food to the dog. Anyway, she did say "Don't be upset; this isn't anything to worry about" and those were the words Mom needed to hear.

But she was still in tears when she went to bed, and my son was really freaked out. He told me I needed to spend the night downstairs and he begged me over and over to do it, but I don't want to do that unless/until I have to. She didn't want me to stay downstairs, and neither of us could think of any particular danger. She's thinking now that the food incident might have happened while she was sleepwalking, but she has never gotten up at night and done anything but go to the bathroom.

I feel so sorry for her and scared too, as always, for what the future brings.

The doctor was going to call today, but that didn't happen.

Fortunately no one got sick! We suspect that the dog got the food, and now I know I need to be more vigilant about what's in her fridge. Thanks for the encouragement. It really helps!

So now I'm curious, did you Mom really get sick the second time and did your dog get sick? I'm hoping since I don't see any posts about emergencies, that it all passed without event!\r\nYou're doing the very best you can, trying to respect her dignity and autonomy and keeping an eye out for her. It is a challenge.\r\nNone of us knows what the future brings. Thank goodness for that. You are doing a great job.

I'm awed and grateful for your strength to even share this with us. I so understand what you are experiencing. I hope it might help for you to know that you are not the only one going through days like this. \"it's nothing to worry about\" is a phrase I'd like to never feel again.....sending gentle thoughts to you and yours.