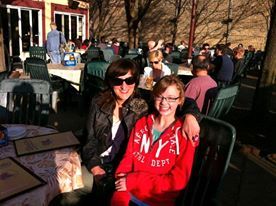 Family History: Passing Down the Conversation


In April of last year, during my 13-year-old niece's spring break, we spent the day with my parents and a video camera.

I had asked Elizabeth, the family videographer, to help me record interviews with my parents. With camera, tripod and questions, we arrived at my parent's house to film.

The day before filming, Elizabeth and I had drafted and emailed questions to my parents to help them prepare. Our questions included:


Elizabeth acted as show hostess, introducing us and asking the initial questions. I followed up her questions with requests for more details. When my dad spoke about spending a summer mowing the lawns of a cemetery when he was 13, I asked him to describe the kind of lawn mover he used so the grandchildren would understand Grandpa didn't ride a lawn mower, he literally pushed one.

My goal was to capture my parents--their personalities, their values and their perspectives. I asked them to share some historical observations as well, describing the city of Chicago as they knew it during their childhood. I knew many of the stories they told, but learned a few. My mom had wanted to become a flight attendant, for instance, but couldn't because her height (5-foot, 9-inches) made her too tall, according to the airlines.

We filmed my parents separately, creating two videos of about 25 minutes in length each. We wanted to film them together and ask the last four questions, but it must have been a difficult day for their relationship because they both said they had no idea what makes a marriage last. (I didn't ask what had happened before we arrived. I felt it best to stay in the dark.)

Elizabeth edited the videos; we plan to create a YouTube channel for the family so everyone has access to them. We've committed to another shoot as we felt we really scratched the surface. We also hope to catch them on a day when they have answers about marriage.

My sister (Elizabeth's mom) called me after watching the videos. "I'm so glad you did this," she said. "These will be so valuable to have."

It's great when caring conversations happen. And, when they take place on camera, you preserve life stories so future generations understand their inheritance.

Have you recorded conversations with your carees? Please share in our comments section, below.