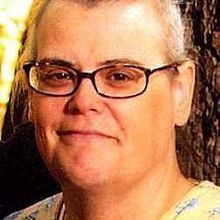 That is a sentence that I never thought I would have to write let alone see it in print in two of our hometown newspapers.

I was married to my wife Valerie for 13 years. We had been together for 15 years.
Valerie passed away on Tuesday September 8th, 2015 at Edward Hospital in Naperville, Illinois at the age of 47.

The last seven years were a challenge to say the least. I was Valerie’s caregiver as she became sick. I won’t bore you with the details as my intention is to celebrate Valerie’s life that we shared together.

I will say this. I learned enough about illness and the human body that I think I could go to med school and become a doctor but I’m too old for that. Now, on to the happy times for me and Val. Like I said earlier, Val and I were together for 15 years.

We met in the most unconventional way possible and that was online. Val’s friend Amy, placed a personal ad for Val on Yahoo! Personals. Val didn’t know about it and I answered it. I wish I had saved the ad or could remember what it said. Oh well.

Val and I started chatting online but I could never figure out why Val had to be at Amy’s house to talk to me. It was because Val didn’t have her own computer to talk to me.

We then moved to talking on the phone. That was a challenge too because at the time Val was working 60 hours a week at her job so she was never home. June 21, 2000. It would become a date that would change my life and I didn’t even know it.

I was working at a radio station in Streator, Illinois and I was talking to Val on the phone. I asked her out on a date. I asked her if she wanted to drive from LaSalle to Streator and we would go to dinner and a movie. “The Patriot” with Mel Gibson was playing. I didn’t really have this all planned out.

Dinner consisted of a night out at the Streator Burger King (classy, right) and then we got to the movie theatre and as I was looking at the marquee. I noticed Rocky and Bullwinkle were playing. I remembered watching R&B as a kid and Val, who was one year, two months and three days older than me told me she watched R&B as a kid. We decided to ditch Mel Gibson and watch Rocky and Bullwinkle.

BTW, the Streator movie theatre is no longer there. Honestly, later we rented “The Patriot” when it came out on video. Got though half of it and stopped watching it. It sucked. Sorry if I have offended any Mel Gibson fans out there.

We ended the night at a bar in LaSalle called Michelle’s Backstreet that had Karaoke every Wednesday night. I used to be a regular there and Val told me she remembered seeing be there before we went on a date. She was shy like me. I know people find that hard to believe. Val told me that she knew we would get married after we had our first date.

Val and I dated for three to four months when I proposed to her. It was an engagement ring from Target. I got down on one knee and asked Val to marry me. She said yes.

The next day, we went to my parent’s house in Ottawa to tell them the good news. My mom told me that Val and I would have to go to Harding (a very small town north of Ottawa) and tell my Grandma Mildred the good news.

Val and I called Grandma ahead of time to see if she was going to be home and we just told her that we wanted to stop over and we had something to tell her. I’m sure she knew. We get to the house, we walk in from outside. We get two feet into the door and Grandma asked me what they news was. I told her Val and I were getting married. Grandma asked us what took us so long. When she found out that Val and I were going to wait a year and a half to get married, she asked why so long and she might be dead by then. Well, Grandma Mildred passed away about a year or two ago at 95 years old.

Grandma was even more overjoyed when we told her we wanted to get married in the church she attended, Harding Methodist Church. April 20th, 2002 That was the day Val and I became husband and wife. What a great day it was. It was a beautiful day and Valerie made a beautiful bride

I think Val learned that I am a simple man to please, I love my sports. Change that, I REALLY love my sports. Val was not the kind of wife that told me I had to choose sports or her. In fact, Val would sit with me and watch a game with me and I would explain to her what was going on.

When I took a new job at WCMY/WRKX Radio which is located in my hometown of Ottawa, Illinois. Val and I noticed that weren’t spending a lot of time together. I got the idea that Val should be my producer/engineer for my games that I broadcasted on the radio. The producer/engineer is the person that puts the game on the air, sets the volume and also broadcasts the other scores from around the area.

One game I remember was in Ottawa at Bader Gym, home of my alma mater, the Marquette Crusaders. It was a home basketball game and Bader was rockin’ and rollin’ and the Cru’ was playing the Hall Red Devils.

Marquette won the game on a last second buzzer beater. The crowd went nuts. I went nuts. We send it back to the studio. Val plays the commercial break and Val goes on the air and reads the scores and afterwards says “Were going to take a break and return to Jamie Newell and Bill Jankowski (my friend and broadcast partner) to see if they have recovered from their heart attacks.”

I heard this through my headset and looked at Bill and said, “Did my wife just punk me on the air?” She got me good.

Val’s health issues started when she turned 40. Again, I won’t dwell on them because Val never dwelled on them. We went everywhere to get answers. It took a couple years of testing and it started to turn as crazy as it sounds, when I became a Christian at Harvest Bible Chapel in Naperville, Illinois. I started going there in August (not sure of the year) and became a Christian in October of that same year. Val was very sick at that time and I thought I was going to lose her then.

When I became a Christian, God really began to show himself to us. We were starting to get answers to some of Val’s medical questions. Val was a complicated and special case one doctor told us.

Valerie was able to become a Christian as well and we got baptized on April 20th (our anniversary) in 2013.

Val and I never lived together for the last almost seven months of her life. She was either in a nursing home or hospital from February 13th to when she passed away on September 8th.

Looking back over the last seven months and I have learned this since I became a Christian. God has us go through trial for three reasons.
1. To teach you something
2. To strengthen your faith
3. To bring you closer to him.

I also think God prepared me for Val’s passing because like I said Val and I didn’t live together for the last seven months of her life.

In that time, I started school at the Illinois Center for Broadcasting in Lombard. Val encouraged me to do it. I moved out of our last apartment and moved back to Ottawa to my parent’s house.

I can’t imagine what it would be like if I had to go back to that empty apartment knowing Val passed away. I think that when God knew that I could handle it. He called Val home to heaven and I know that’s where she is at and I am going to see her at another time.

They outpouring of emotion have been great through Facebook and the visitation and the funeral. I want to thank everyone at Caregiving.com for all of the kind words and to Denise for making the trip to Ottawa for the visitation and also to everyone who pitched in for the flowers.

A couple more things, I promise. One verse of Scripture has gotten my through this. It’s a very popular passage. It was one of the first ones I memorized when I became a Christian. It’s Proverbs 3:5-6 “Trust the Lord with all your heart and do not lean on your own understandings. In all your ways acknowledge Him and He will make straight your paths.”

Finally, you are probable wondering why I called Valerie “Poohbear”. Well, Valerie loved Winnie the Pooh. So she became my “Poohbear”

RIP “Poohbear” You were a part of my life for 15 wonderful years, including 13 as my wife. We had our challenges there is no doubt about that. We loved each other, took care of each other and fought for one another. I know you are smiling down from heaven and even though I won’t see you again here on earth. I will see you again in heaven.

My heart is shattered. I lost not only my wife, but my best friend and my soulmate. I will carry you with me for all the rest of my days here on earth.

This is not goodbye. It’s I’ll see you again.
Thank you for being the best wife a guy could ever have.

Again, I love you, My Poohbear

<a href='http://www.caregiving.com/members/jvnewell/' rel=\"nofollow\">@jvnewell</a>, Jamie, I am so sorry for your loss. Thanks for the peek into your history with Val, I especially enjoyed the story about ending up at Rocky &amp; Bullwinkle. I am glad you are staying at your folks right now and in school... I hope you stick around and still come to chats and share your journey when you are up to it. I'll let you know if a job ever comes up at our radio station!

Thank you Jamie for sharing your story with us. I always felt you and Val were so special and didn't know this beautiful background. We will continue to be here for you and hope to hear your voice in the big leagues soon! We know we will see Valerie again!

Thank you for all the kind thoughts.\n\nJane - send me a friend request on FB if you would like. Search Jamie Newell.

Jamie,\nThanks for sharing your life with Val. I know it is s heartache for you right now. No one can take that pain and loneliness that you are feeling right away but perhaps in time it will get easier. \nYou sound like you are on the right track with going on.\nAs they say life goes on and Val will always be with you. God bless and take care.

What a gallant and tender memorial for your dearest love. Thank you for sharing it here with us. I hope you will always feel comfortable coming here for company along the journey, whatever day you walk and wherever you go.