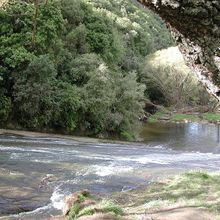 Lewy can run like an out of control freight train.

This is our experience as of late.

I had been seeing the declines coming in Hubby. I didn't want to acknowledge them at times but I could still see them.

His speech was more garbled, his cognition was worsening, less mobility, you know, that stubborn pull himself along mobility, hallucinations had increased as well as delusions. They weren't pretty. He was losing weight, eating less, staying up for days on end or sleeping. Falls were still happening. 18 of them from November through today. But other than restraining Hubby, I couldn't keep him from trying to get around.

Thanksgiving quietly came and went. Our 32nd anniversary did the same as well as Christmas. This year I bought a very small table-top tree. I bought two actually, one for the living room and one for the bedroom where Hubby stays.

The hallucinations were causing more anxiety for Hubby. To him they were hostile and threatening to self, property and others. So bad that we made a pre-Christmas visit to the V.A. ER to try and find something to relieve his suffering from them. And I TRULY believe these hallucinations are a form of suffering.

Now I know this is pretty intense discussion so on a lighter note, while at the hospital to deal with hallucinations, guess who walks in? Santa! Now try explaining that the people Hubby sees are not real but Santa is!

Back to the intense, we decided to try a small dose of a new med, Seroquel, for the hallucinations. I watched him like a hawk for side effects but nothing really stuck out at me. Declines continued.

One thing that did happen as a positive, he had always had a terribly dripping nose. It was awful and we have tried every OTC and prescription we could get to combat it with no luck. Hospice had a patch they suggested. It is used to help with excess secretions so I read all the info and again watched him like a hawk for any of the gazillion side effect warnings listed on every bottle or box of meds. The only thing I did notice was the runny nose STOPPED! It was like a miracle patch! Everyone lift your hands to the air and say, awww!

So the running nose stopped but the declines didn't. What it feels like is we were sliding down the side of a mountain with some sort of footing until we lost it and started tumbling and grasping every shrub, limb and rock we could find along the way to slow us down with no luck.

Right now this is how the blog is going to go, fast forward.

On January 19, Hubby had a catatonic episode. He lay in his bed with a blank stare or eyes closed, non-verbal and non-responsive to anyone. Not moving and he stared at you like he was looking through you. At first I thought he had a stroke but slowly he made some responses that made me doubt that. Then a couple hours later just sat up in bed like nothing happened. The next 3 days he was sick to his stomach and throwing up. Then it all hit the fan. The following is a copy paste of a group message I sent.

On January 25, we had a scary episode with my husband where he turned violent. Besides kicking me and trying to punch our daughter, he put a choke hold on our cat and tried to strangle it. Our daughter and I both had to wrestle the cat out of his grip.

I had to get an ambulance to take him to the VA and he is admitted to an observation ward.

I even had video of part of his episode to show the doctor.

Once he got to the hosp he was Mr Calm Cool and Collected. But they kept him and had a sitter to keep an eye on him. He did great, so well that the sitter was told she wasn't necessary any longer and left. Shortly thereafter, according to the head nurse, he had melt down.

I hate that he had that and at the same time glad so that they could see for themselves.

Today wasn't any better and not only was I the bad person, so was everyone else.

I felt like my presence was making things worse so I cut my visit with him short.

They will keep him for a couple of days to look for underlying issues like infection. But personally, I feel this may be progression of the disease.

I know they can't "fix" the problem, but I would like them to find some peace for my husband. I feel like he is suffering with his mind.

Worse, I feel like, if we can't find him some relief, I can't bring him home.

I feel blessed that I am at peace that I will have to make this decision, I have prayed for clear answers. I just find it hard to think we are at that point. Seven years went by so fast.

On January 26, Hubby's decline was moving faster. He wasn't eating or drinking. The VA did a CT scan to see if a recent fall might have caused some repairable damage in his head. I was hoping for a brain injury, but that wasn't to be the case. Results showed nothing that jumped out as a reason for the violence. He continued to be combative and had to be restrained a few times. Meds were changed to see if we could lessen the hallucinations that were causing his great anxiety but nothing was working. Another down turn came with another catatonic episode that lasted the majority of the day then, like the last time he came out of it.

On January 28, I walked into Hubby's room to ask the sitter how his night was. She informed me that Hubby had slept well, sitting on the side of his bed ate some breakfast (liquid diet) and was pleasant. What great news! He was resting when I walked in but when I started talking he opened his eyes and looked at me with a big smile. He was pleased to see me and wanted to come home. I was overjoyed, I let my heart run with the hope that it could work out. Had we found the key that worked?

Then Hubby laid down and when he woke, he was agitated and angry. My hope to bring him home was dashed.

I cry prayed. FYI: Sobbing snot prayers are not pretty but they are still effective.

That night I slept. The next morning, I woke with a peaceful yet determined resolve to get my husband to a facility closer to home.

It became my mission, so as I encountered Hubby's doctors, I respectfully told them what I wanted the end result to be and invited them on board to make that happen for Hubby and for me. They did!

As of yesterday, Hubby was transported to a more local Hospice inpatient facility for two weeks. The original plan was for me to stay during the day and go home at night. I still had Hubby's brother I was caring for (YAY!) also and he would need to go to school. Yeah, those plans fell through once Hubby arrived at the facility. He had taken another down turn and I made the immediate decision I wasn't leaving him. I called Hubby's sister and her husband and they were more than happy to care for BIL.

I called the rest of the family and suggested they might want to come and see Hubby sooner than later.

As of this evening they all have.

On Wednesday January 29, Hubby was conversing and cracking jokes. As the evening wore on he became agitated and anxious.

On Thursday January 30, before his transfer, I called to see how his night went. I was told he had talked all night. When he arrived at the new facility, he was talking non-stop but his sentences weren't making much sense, anxious and grabbing at imaginary things in the air and blankets. Thursday evening he became incoherent, he talked all night continuing to grab at air and blankets.

Today, Friday, Jan 31, after an entire night of chatter and anxiety he FINALLY went to sleep and slept peacefully. He isn't grabbing imaginary things from the air or blankets. But he also isn't responsive to anyone.

Tonight I sit and listen to him sleeping, grateful that the prayer for his peace of mind and body are answered for now.

How am I? I told someone, I'm peaceful, a little tired and sometimes my own brain feels like mush. I have my moments but all in all I'm doing okay. I believe in the power of prayer. I just have to be accepting of his answer, yes, no or later to experience that peace.

I still hurt though, I hurt me and for our children. I feel like I'm holding it together but barely at times and wonder if I can be the support for them that they need. They are hurting too.

I'll leave on this though, just before Hubby became non responsive I leaned over him and asked if I could kiss him, he mouthed yes but didn't make an effort so I did, then I said "I love you." He responded, weakly, but I heard it, "I love you, too."

My thoughts are with you. It tough seeing our love ones not doing great, but he knows you are there. Remember to take care of yourself.

Hi Kathy--Thank you so much for the update. \"Fast and furious\" it has been. You are doing so well about keeping up and keeping the faith. You have so much treasured memories of your loving care to bring you peace each night. You've accomplished so much on behalf of Hubby and yourself. You've cared and advocated and educated and cared. :) I've learned so much from you and feel very blessed to be a recipient of your wisdom. As always, I'm thinking of you and yours.