Yesterday my partner thanked me.

She's been reading our copy of the Complete Family Guide to Schizophrenia by Kim Mueser and Susan Gingerich. Schizophrenia had been one of her interim diagnoses. When the cognitive neurologist told us my partner had MS that acts like traumatic brain injury, he said that it can often look like schizophrenia. Her regular neurologist said there's no way to tell where her MS ends and her mental illness begins.

Yesterday my partner read a passage to me from the book. The passage was about communication: listening to the person with schizophrenia (including delusions), and respecting that person's choices, including wrong choices. It was about giving the person with schizophrenia time and space to find her own way. My partner thanked me for listening to her and for giving her that time and space.

(As seen in some of my recent entries here, I draw the line when it comes to safety issues. Otherwise, I try to be as flexible as I can.)

My partner's thanks meant a lot to me. Two days earlier she had accused me of "colonizing" her, because I refused to do something she wanted me to do and which would have been a bad idea. Nothing I said made any difference. Finally I just backed away and refused to continue, because in addition to being agitated she was pushing some of my own hot buttons. As I said in the chat on Tuesday night, my partner was being pissy that day.

The thanks -- especially thanks like this one -- surprise me when they come. There are moments, sometimes days, of clarity and something resembling normality that I've learned to enjoy and be thankful for in the moment. I can join my partner on her rise and we can enjoy it together, for as long as it lasts.

The here-and-now becomes something I hang onto. It helps me slog through the bad days.

During that kind of rise, I'm tempted to remind myself that the rise won't last, that I shouldn't blind myself to my partner's disorder. But reminding myself that the clarity is temporary can blind me to the here-and-now, such that I miss that opportunity for respite and gratitude.

As I said in the chat, I remind myself that even the bad days are the good days. (The good days are the really good days.) When push comes to shove (e.g., with safety issues), I have to be at least as stubborn as my partner is. It can be physically but especially emotionally exhausting and it is when I feel most helpless.

If she loses that fighting spirit, I know I'm going to miss it for all its trouble. That's why I tell myself the bad days are also the good days.

Last night I watched a live chat hosted by the CBC on Cmdr. Chris Hadfield, the first Canadian to take command of the International Space Station (replay here). My partner was asleep, otherwise she probably would have joined me; it's the sort of thing we enjoy watching together.

One of the questions posed by the host boiled down to: What would you tell someone who wants to go into X profession? Whether that be an astronaut, a scientist on the ground, or someone who, like Hadfield's son Evan, masterminds the social media that brings his father's eloquence from space to the world.

The answer remained the same: prepare in advance. Do the research, study the necessary subjects, and work hard every day toward your goal. Even if your initial goal goes out of reach, you are still doing something you love.

Even before caregiving, the string I drew between present and future picked up a lot of knots. But it remained and still remains unbroken. Caregiving has turned it into silly string, a sticky mess that covers everything. That silly string can blind me with all that it obscures.

I haven't given up on the things I want to accomplish in life, but right now and for as long as it takes, I'm taking the scenic route. My future becomes: get through this day (this hour, this minute). Okay, now get through tomorrow.

Right now, living in the moment includes reading. My partner and I are both on different yet parallel journeys.

Her reading has gone from Thomas Szasz's The Myth of Mental Illness to behaviorist B.F. Skinner's three-volume autobiography to John Bradshaw's Healing the Shame that Binds You and now the schizophrenia book. (I had bought the first and last books after borrowing them from the library. I already had Skinner's autobiography; my partner already had the Bradshaw.) Over the past four years, my partner has been through a hysterectomy; diagnoses of OCD, schizophrenia, and now MS; and the death of her father, who was also her abuser. Even without her disorder -- which her neurologist now believes dates back at least to 1982 (I agree) -- that's a lot to handle.

Thanks to Project Gutenberg (whose downloads are free) and my new eReader, I've been reading the 1,146-page Journals of Lewis and Clark, 1804-1806. It transports me. The expedition travels through lands unknown to European settlers, with no map and with whatever guidance they can get from the indigenous Nations they encounter. They press on through serious injury, sickness, and death, and in extreme weather. They lose supplies when their canoes overturn. They must retrace their steps and turn back from dead ends. They lose each other and find each other again -- a note attached to a pole vanishes when a beaver cuts the pole down for a dam. The skins they rely on for clothing and shelter are carried away by "Panthers or wolvers" and they are pursued by bears.

On August 18, 1805, Meriwether Lewis wrote, "This day I completed my thirty first year, and conceived that I had in all human probability now existed about half the period which I am to remain in this Sublunary world. I reflected that I had as yet done but little, very little indeed, to further the hapiness of the human race, or to advance the information of the succeeding generation. I viewed with regret the many hours I have spent in indolence, and now soarly feel the want of that information which those hours would have given me had they been judiciously expended. but since they are past and cannot be recalled, I dash from me the gloomy thought and resolved in future, to redouble my exertions and at least indeavour to promote those two primary objects of human existence, by giving them the aid of that portion of talents which nature and fortune have bestoed on me; or in future, to live for mankind, as I have heretofore lived for myself." (I've left his spelling intact, both here and below.)

Lewis obviously could not see into the future, neither with respect to what the expedition would accomplish (for both good and ill), nor with respect to his own life, which would end four years after he wrote that journal entry.

What my partner and I experience is the latest in a string of expeditions, with our own versions of peril and wrong turns. Our own versions of the Rockies rise in the distance, making us blind to what lies beyond them.

Whether consciously or not, we construct maps from what we read, seeking the path that will get us through. And like the explorers of two centuries ago, I bask in and am thankful for fleeting moments of beauty.

"he remaining part of about 200 yards on my right formes the grandest sight I ever beheld, the hight of the fall is the same of the other but the irregular and somewhat projecting rocks below receives the water in it's passage down and brakes it into a perfect white foam which assumes a thousand forms in a moment sometimes flying up in jets of sparkling foam to the hight of fifteen or twenty feet and are scarcely formed before large roling bodies of the same beaten and foaming water is thrown over and conceals them....from the reflection of the sun on the spray or mist which arrises from these falls there is a beautifull rainbow produced which adds not a little to the beauty of this majestically grand scenery. after wrighting this imperfect discription I again viewed the falls and was so much disgusted with the imperfect idea which it conveyed of the scene that I determined to draw my pen across it and begin again, but then reflected that I could not perhaps succeed better than pening the first impressions of the mind....I hope still to give to the world some faint idea of an object which at this moment fills me with such pleasure and astonishment, and which of it's kind I will venture to ascert is second to but one in the known world. I retired to the shade of a tree where I determined to fix my camp for the present and dispatch a man in the morning to inform Capt. C. and the party of my success in finding the falls and settle in their minds all further doubts as to the Missouri." -- Lewis, June 13, 1805. 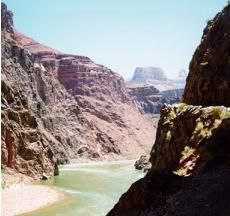 The Colorado River, taken from the Grand Canyon's Bright Angel Trail. In 1998 my partner and I hiked to the floor of the canyon and back up, fulfilling a lifelong dream of hers and enriching my own life.