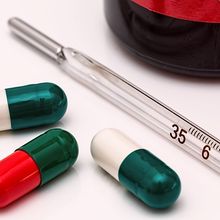 I am glad I read Bob De Marco's article in Alzheimer's Reading Room on fever before my husband was hospitalized last month. The article stated that, in older people, the 98.6 temperature does not hold true. Most older people have lower temperatures. He also stated that we should take our senior caree's temperatures every day to get a base line for the individual. A rise from that temperature should be considered a fever and  is often a sign of infection, often a urinary tract infection (UTI). Why don't doctors and nurses know this?

When I read the article, I went out and bought a new digital thermometer. I had not gotten into the habit of using it but I remembered that when we visited the doctor in the past, his temp was always 97 something. In the hospital, they did his blood work and urine test when he came in, which showed that he had had a stroke but no infection. Two days later, his temp was up to 99.1. I had to insist that he be retested and they found that he had a urinary tract infection. They put him on antibiotics right away and he got better. The symptoms that I thought were from the new stroke went away.

I appreciate knowing this. Thanks!

I had read his article and it was so helpful to know as we were able to catch a couple UTIs having this knowledge!

I'm sorry I missed Bob's article. I'll have to go check it out. Two years ago my mother passed away from sepsis due to a urinary tract infection. The first thing we noticed was a change in behavior. We had to call an ambulance to assist us in getting her to the hospital. When we arrived, her temperature was 90.6. Yes, you read that correctly.....90.6!! That was one of the first things that alerted the physician's assistant to the fact that she most likely had an infection. \r\n\r\nI think getting a baseline temp is a good idea. It can help the medical professionals with their care.

One more example of the Very Many Things we know, which the medical business does not.\r\nThanks for sharing this.

Thanks for sharing this info about seniors &amp; temperatures Michelle. \r\n Your DH is blessed to have you for his advocate!