Fight for the Greater Good or Keep the Peace?

Fight for the Greater Good or Keep the Peace? 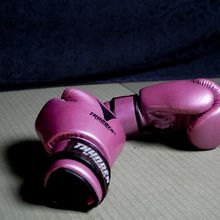 So many of the discussions here revolve around making difficult choices or making the best out of a difficult situation. There's no rule book or guide to help us navigate. I wish there was.

My mother has thrown a fit with every milestone, whether it was putting on her own shoes or mixing her own benefiber into her breakfast. These are huge fits- sometimes it starts as a sarcastic remark, but it always leads to a pity party of "You don't love me" or "You're killing me." I have been working with her constantly on her physical abilities, and in five months, she has gone from not even being able to roll over in bed to transferring without a gait belt or help. She even walked barefoot through the house the other day using her walker- which was a huge celebration for her- the first time she felt the floor beneath bare feet in almost two years.

None of the milestones has come easily, but when she gets through it, she's proud and integrates the new skill into daily life. While it's happening, she treats me like I'm the root of all evil. Last weekend, she decided she could no longer transfer without assistance, so I provided her with tough love, and insisted she do it on her own. There's a blog on that whole story.

To keep it short, though, my brother felt bad for her and came in to get her out of bed, bashing me and telling me I was wrong to do it. Not only that, he called me abusive, and said he and his wife discussed filing elder abuse charges. So, I gave him an opportunity to see what life with my mom is like--I insisted if he was making these decisions, he should be the one to care for her.

So, although he hasn't spent more than a few hours with her in the past five months, and has not been in communication with her doctors about her behavioral issues, depression, or physical capabilities, he still feels like he knows best, and that I was wrong. He likens himself to a white knight, jumping in and saving my mom from me.

I am my mom's legal guardian in her home state. The court hearing to transfer it here was today. I spoke to all the parties yesterday- lawyers, social workers, etc, and told them all what had happened, and that my mom was living with my brother now. The social worker and my mom's court-appointed attorney were shocked. They said "He has no idea what he's getting into," "You handled things well and I commend you." Well, I appreciate the kind words, but that doesn't help me out one bit with the family drama.

My brother was criticizing me for not following up with my mom's Medicaid case enough. He's sure I haven't followed every avenue. The lawyer actually said, "No, this is par for the course. She has done everything possible and then some." My brother said he's looking for a new assisted living facility for my mom. I asked why- she's already chosen one, it has a vacancy, and she's on a list anyway, just in case a list begins to form while we wait for approval. He says he needs her closer to him, "after what you did," he said to me. Now, he wants to fight for guardianship, which the lawyer said would probably not happen, unless my mom moved in with him permanently. Last weekend's events aren't going to change that. Yes, she told him this, too. Still, my brother is certain I have horribly wronged my mother. They asked me for her cash already. I gave them the remaining $188 and supplies to last them a full month. My sister-in-law sent me a message asking for a full accounting of where my mother's money has gone. I sent her a detailed expense list showing that I have spent thousands of dollars of my own money caring for her.

But now, my brother wants to fight for permanent guardianship. I'm incredibly torn. On the one hand, I took the position because nobody else would step forward. Day-to-day care and her expenses have totally done me in. On the other hand, I have watched her grow and improve, and I know that it's because of the way I handle things. Initially, I was accusatory of her group home for using a machine to transfer her--that's why she became immobile (despite some post-stroke recovery) and was hospitalized for problems related to lack of movement. Now, I totally get it. They couldn't force her. They couldn't push her the way I do, so she just didn't do things or progress. She quit. My brother won't push her, either. Again, he thinks it's cruel to make her do what she can for herself.

I'm currently weighing the pros and cons. I know my mother will improve under my guardianship. She will walk again, and she will be able to eventually live the least-restrictive, normal life possible. She isn't going to get that from my brother. With that said, growth is painful, change is hard, and my mother rejects it. I could hand over guardianship, no questions asked. That just about ends things family-wise. It makes my life a zillion times easier. In my heart of hearts, it doesn't feel right, though. As I sit here, I am wondering if my continued fight is worth the outcome. I think back to all the times my mom saw a TV show and cried. "I always wanted to swim with the dolphins." "I miss swimming." "I want to feel the sand on my feet again." "I want to ride horses." "I need to walk again." She would sob, and I would hold her and I would tell her that someday she will. If I fight, it's because I want to give her those things, despite herself. Despite my brother's lack of understanding. If I walk away, I feel like I'm quitting on her and on her dreams. Right now, she's focused on her anger for me, for pushing her to get better. If I can give her her legs back, the anger will be worth it, but that means fighting family and fighting her.

That is true. My brother seems to be acting somewhat agreeable today, so maybe he won't feel the need to continue. We shall see.

Jen, ditto on all that Mar said. I always find it so disheartening when siblings just don't \"get it\" and your brother and his wife go beyond that. My mouth dropped open when I had read your earlier post. I know you care for your mom out of love, choose what's best for her health and have endured your mom negativity to do what's best for her. You do it for love, not recognition, but it sure is nice to hear... job well done once in awhile. Kudos to the lawyer and social worker for acknowledging that! \n\nLike Mar said, only you can make the decision that is right for you. That's a tough one... I so totally understand your pros and cons. I so often wish I could just take my granddaughter \"magic wand\" and make everything better.

Jen, the only \"thing I know for sure\" is that you are the only one who can decide this. I'm assuming because guardianship was necessary that she is unable to competently decide this for herself?\nI can sure understand how offended you'd be after all the care you have given to be questioned and asked to give an account. Those are deal breakers for relationships.\n\nHow wonderful the affirmation you received from the folks today that you have been an advocate of every kind.\n\nYour mother is blessed to have you, and I know you'll continue to do everything in your power to make sure she is well cared for, no matter where that takes place.\n\nMy Mom's physician once said to me, in her British accent, \"You are a devoted daughtah.\" I say the same to you. \n