I get my taxes done next week. In addition to doing office clean-up and organizing, each year at this time I gather together my receipts and update my spreadsheets. I attempt to make order out of the chaos of little slips stuffed in manila envelopes -- and I also try to get a clue about how our household budget shapes up over the years.

I don't just gather the tax-relevant figures. I log everything. It gives me a clue as to how much goes to what, where, and when.

This year I did a bit more number-crunching than usual. The year 2012 yielded this breakdown: 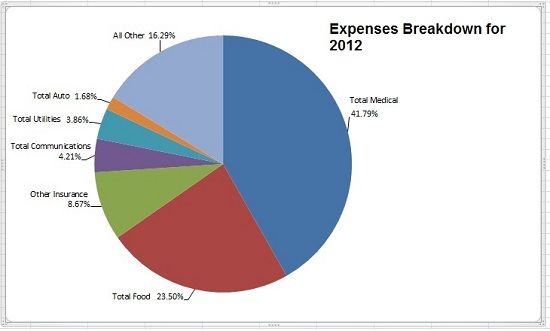 I count my blessings that I can afford private health insurance for my partner and myself. It makes a huge difference and is something I do not take for granted, ever.

That said, the premiums alone for both of us account for 32.82 percent of total household expenses for 2012. That doesn't include deductibles, out-of-pocket payments for medical appointments and tests, copays, prescriptions (including eyeglasses and eye appointments), or dental work -- neither eye nor dental are covered under our plan. Coverage for mental health services is limited. Almost one-third of our total household expenditures last year went to pay just for health insurance premiums.

I used to gripe about that -- until 2009, when my partner was hospitalized twice, first for a hysterectomy and then for a bowel obstruction, with a four-day stay each time. Without insurance, I would have been billed -- for the hysterectomy alone -- more than all the premiums I had paid for both of us, from the time I had switched to private insurance in 2003.

To lend some perspective on regional differences, the premiums I pay in Florida for my partner and myself are still less than the premiums my former employer in Massachusetts had paid ten years ago. True, the carriers are different, but so far as I can tell the coverage is comparable.

Over the past five years, from 2008 to 2012, our health insurance premiums alone have risen by 40.06 percent. That contributes to a 22.21 percent increase in total medical costs over those five years. That "total" figure is a bit misleading because 2011 had been the highest year in terms of costs, due mainly to specialists and extensive testing prior to my partner's MS diagnosis. Our non-premium medical expenses were lower in 2012. The graph below represents actual dollar amounts rather than percentages. 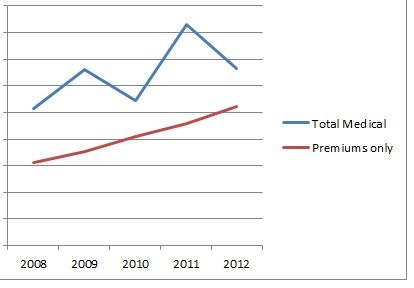 Here you can see the premiums' steady climb and the zigzag of our total medical expenses. The peak in 2009 includes my partner's two hospitalizations.

Insurance other than medical includes our home and two vehicles and comprised 8.67 percent of total household expenses in 2012. That represents a 21.63 percent increase in actual cost from 2008.

Total communications includes Internet, land line, and two prepaid cell phones (no voicemail, texting, or data subscriptions), and had also included basic cable TV. In May 2011 our TV died and we did not replace it; however, we upgraded our Internet from dial-up (yes, we were still on dial-up!) to high-speed cable. As a result, our 2012 communications expenses dropped in direct cost by 22.98 percent compared with 2008 and formed 4.21 percent of total 2012 expenses.

Our utility costs -- water and electricity -- rose 16.5 percent from 2008 to 2012 and last year comprised 3.86 percent of total household expenses. The average per-person water use in our house is 9.59 gallons per day, or 5.45 percent of the average American's consumption of 176 gallons a day (Source: Water Information Program). In 2010 our average monthly electricity use of 521.83 kwh was 55.51 percent of the U.S. average and 46.14 percent of monthly average use in Florida for the same year (Source: U.S. Energy Information Administration). We actually used 8.5 percent less electricity in 2012 than we had in 2010.

My partner's insistence on using gray water however we can plus her covering all our doors and windows and gasketing every light switch and electrical outlet help reduce our utility costs. She views it as one of the ways she contributes to the household. Win-win. :-)

Finally, there's everything else, which last year totaled 16.29 percent of expenses. Over the past five years that has Included a couple of big-ticket items, like roof replacement in 2010 and A/C replacement in 2008. Those were the only years in which the "All Other" category was larger than "Total Medical."

How does that compare with the average American? Here are figures from the 2010 Consumer Expenditure Survey:

The percentages in the graphic refer to the proportion of money spent from a year's income ($62,481 in the example), but I'm going to use proportion of total expenditures ($48,109 in the example) to correspond to my own pie chart. (Both my earnings and my expenditures are considerably lower than the example.) The results describe the "average American consumer unit" -- 2.5 people, 1.3 earners, and 1.9 vehicles on average, compared with 2 people, 1 earner, and 2 vehicles in my household. (The second vehicle is driven only about once a month.)

Again, I am extremely thankful that I can afford health insurance for both of us (there is no family rate in our case; we are both treated by our insurer as "single"). I am very much aware that devoting this much of my household expenses to health insurance is fully my choice, and I am grateful to have that choice.

I was a renter until we moved here in 2003. That's also where the numbers flip as far as we are concerned. We are very fortunate to not have a mortgage, which leaves us with home insurance and property taxes plus the expense of maintaining a 33-year-old structure -- hence our roof and A/C replacements over the past five years. Each of those big-ticket items took a large chunk out of our total expenses for the year: 21.9 and 11.14 percent, respectively.

Last September the Bureau of Labor Statistics released its figures for 2011.

The effect of caregiving and of health care costs on budgeting in general is clear, but there is so much else to consider. Our water consumption would be considerably higher if my caregiving included wound care, for example. Our electricity costs would rise if we had to power medical equipment. Every situational change requires a reshuffling of priorities.

The more information I gather, the better I can get a clue for how to proceed. And every clue leaves me better able to confront chaos as it arises.