First You're Up, Then You're Down - The Paperwork Continues

First You're Up, Then You're Down - The Paperwork Continues 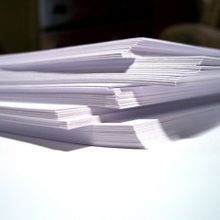 In the oh-so-long litany of paperwork and assorted B.S. isn't it "funny" how as soon as something good happens, something else rears its ugly head to burst your bubble?

On the it's-about-time-something-went-right front, Medicaid paid off the care facility. That was a surprise. I received a statement last weekend that showed a "transaction reversal" line item for all but $14 of the bill. Not wanting to look a gift horse in the mouth but still not sure what the heck the "reversal" was for, I called on Monday. They told me Medicaid paid them.

Nothing from Medicaid itself still to acknowledge this at all.

I have no clue if they are also going to pay the pharmacy or the hospital. Not a clue. Not particularly worried as those amounts are small-ish and the lawyer said to ignore them. Still, it would be good to know. And then there's all the receipts I turned in for the trip out and back to get Mom buried (gas, tolls, hotel stays).

However, I do know that the hospital turned Mom's bills over to collection despite having been told that she was deceased and that there was no estate multiple times. Five times in one day they called the house according to the caller ID record. Didn't leave a message though. So I called them back and talked to those people. The person said she would pass the info on to "legal". I offered to provide a copy of the death certificate but was told no, if they needed anything the legal department would let me know but it was doubtful that they would call.

I'm glad the care facility was paid, I did feel badly about not being able to give them anything since they took good care of Mom while she was there.

So just when you think things are looking up .... the lift chair decided to quit working. Barely 5 months old, $900 chair and poof! pushing the buttons on the handset results in no movement at all. It is now stuck in the reclined position. So I called. This person couldn't seem to understand a few simple things: (1) that the chair was now at my house and not still at the care facility; (2) that Mom had passed; (3) that we did not pay for the thing with Medicare/Medicaid $$

They were REALLY stuck on that last one. Per their instructions, I scanned and sent them a copy of the transaction (online so email receipt/invoice). I included the page of the bank statement also showing the transaction via debit card. Not sure how you're supposed to prove something didn't happen - I have no paperwork to prove I didn't submit the chair claim to Medicare/Medicaid. Person said she'd pass the info to her supervisor and if approved (the warranty) then the tech would call me. I think (not sure though) that they DID understand that I checked every cord, plug, and connection and confirmed that it was getting power before I called, but who knows.... They didn't take down my phone number.

And again, I have heard nothing. No acknowledgement of receipt by return email. They may call themselves "customer service" but as well all know in most cases that is a misnomer... there is no service.

So chair stuck in reclined position (not good for the living room space) and silence as to whether they will actually honor the warranty.

Oh yeah, and I somehow pulled a muscle in my back trying to get out of it when it quit working.

At least the care facility is now paid for. I don't want to get TOO cocky but maybe, just MAYbe we're nearing the end of the paperwork.... Maybe.

Cat, hang in there. I remember when my husband died thinking \"will it ever end!!!\"..Seems like you get one thing taken care of and two more pop up. Feels kind of like that Guaca Mole game! Hope your chair gets unstuck soon.