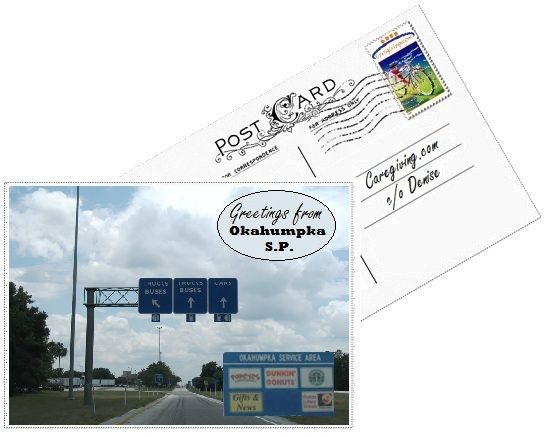 Back in 2011 I attended a caregiver conference in Orlando. On my way home I stopped at the Okahumpka Service Plaza for gas and a bite to eat. While there, I called my partner to give her an estimate of when I'd be home.

My partner has renamed the service plaza, "Okahumpka and Uncle Whizzy."

It's one of two service plazas on Florida's Turnpike between I-75 and Orlando. I've stopped here a few times over the years. At 40.25 miles from home, it took less than a mile to reach it during today's ride.

There is an actual town in Lake County to the east, called Okahumpka. (The service plaza in Sumter County is named after the town.) As of 2012, the town's population was 1,120 people.

The name has several translations, depending on whom you ask: "Single Lake," "Lonely Water," and "Deep Water." The town is located on the site of an ancient village known as "Okeehumptee," a combination of the Hitchiti oki ("water") and Seminole-Creek hamki ("one").

Another source translates oka as "water" and humpka as "deep." A spring in the area contains exceptionally deep water and used to be called Bugg Spring, for a man who drowned in it. Closed to the public, the spring is part of a Navy program for training divers. (Source: TripTrivia.com)

There used to be a train station in town.

But it's been moved and was an attraction at last year's Florida State Fair in Tampa.

The Campbell House (also called the Valentine House) was added to the National Register of Historic Places in 1999. According to the Florida Department of State, Division of Historical Resources, it was constructed by John and Matilda Campbell and is one of the few houses from the 19th century remaining in the town of Okahumpka. The building and its surrounding agricultural acreage are the last remaining significant evidence of the community’s development in the 1880s.

The Okahumpka service plaza is pretty, too:

I stopped there early in today's ride, so it fortified me to go the rest of the way, on into Lake County. My partner, who is also exercising by walking around the house, is very happy that I've taken a rest stop at Okahumpka and Uncle Whizzy. :-)

Update: Chris, Denise, and I are figuring out a system for pooling all our miles and minutes together, to give us one big collective road trip! Stay tuned!

And check out this awesome video by Chris -- who looks great! :D

On a related note -- I have also just crossed the 1500-mile mark of pedaling since September 1, 2012, in my Virtual Ride Around The Equator. I wrote about that ride here. Chris's comment on that entry is what got our whole VRide started! Thanks, Chris! :D

Well, EJ, I now want to visit Okahumpka!! What a wonderful rest stop. And, congrats on surpassing 1,500 miles. This is a wonderful, amazing milestone, EJ. I'm so glad you're sharing it with us.