Friends To Look Up To

Friends To Look Up To

0
I wrote this article in 2008 after visiting with these two special friends. Yesterday, I lost my Buddha friend, Mike. He lived much longer than most people do after such a serious accident. He was truly a gift to everyone who was lucky enough to be around him. I hadn't been able to spend much time with Mike over the last year or so, but I am so grateful I was able to know him for awhile.

Stopping in to see my friend, Carolyn, she greeted me and immediately asked how I was doing. “Bill told me about your Parkinson’s,” she said, “That is so awful. How are you feeling? How is Chris taking this? I can’t believe you drove all the way up here just to see us.” She then asked about our kids and wanted to know all the news. She expressed her concerns for how we were doing financially and said she’d pray that my disability benefits would be approved right away. I responded to Carolyn as I try to respond to everyone. It’s hard to explain, I say, but my Parkinson’s has really been a gift to me as much as anything else. Carolyn got it. She looked at me and said, “I know what you mean. People look at Bill and I and think that our situation is awful. But they don’t know the blessings we have every day.” 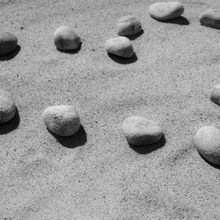 The next day I went to see my good friend, Mike. He greeted me with a smile and a hug, made sure I had something to drink, and then we sat and talked. As we were in elementary school together, a lot of our chatting is about “old times”, people and places we knew when we were younger. We both enjoy music and sometimes we sing the old songs together, remembering the Beatles, Herman’s Hermits, Gordon Lightfoot, and others. We talk about movies and laugh about our favorite humorous scenes. More than anything else, we laugh together. While we were visiting that day, Mike turned to me and said, out of the blue, “I am so lucky!” And indeed, he seems happier and more content with his life than most people I know.

I thought about these two friends of mine the other day as I prepared even more paperwork for my disability files and pondered this rather daunting experience of applying for benefits. Mention that you aren’t working and are thinking of applying for disability, and usually you hear instant judgments. Our society seems to want us to feel as though we are cheating somehow if we are not able to be gainfully employed. It took me a long time to feel okay about doing this and it was only after my doctor insisted that I needed to start this process that I actually made my appointment with social security. I certainly wasn’t helped by the lawyer who let me know that he’d “eat his revolver” if anyone told him that he had something like Parkinson’s disease.

Contemplating the possibility of having a progressive illness is scary. I will admit that! But I have learned that even illness comes with its own gifts. It’s not so hard for me to see the gifts of my Parkinson’s. Life is slower. I have more time for people. It’s easy to let go of things that don’t really matter anyway.

Carolyn is paralyzed, a quadriplegic from having polio at age six. She is totally dependent on others for all of her physical care. When I came to see her, she had been confined to bed for over a week because her electric “sip and puff” wheelchair was broken down and the repairman had been delayed. When she is back up and ready to go, I know she’ll again be taking care of the other residents in the apartment complex she lives in. She’ll be ordering groceries for one client and arranging transportation for another. She’ll be up at her table, working on her computer and painting beautiful pictures, holding a paint brush in her mouth. And she’ll be much more concerned about the welfare of others than in her own challenges. Her partner, Bill, also uses a wheelchair, has cerebral palsy and is developmentally disabled. He cooks for Carolyn, manages a small store, and takes care of his garden.

Mike was a fireman and paramedic before an accident left him paralyzed on his right side and with a brain injury. His short term memory is impaired. He cannot sit up unaided and it is hard for him to hold his head up for any length of time. Speaking is difficult and even such things as breathing and swallowing are not to be taken for granted. He, too, is totally dependent on others to care for him. But I have never left his house without feeling like I was the one who was taken care of.

I have seen Caroline go through devastating health crises when she wouldn’t be expected to live through the night. I look at photos of Mike from before the accident and feel that I have suddenly been punched in the stomach. If I could change what happened to them, I would do it in a heartbeat. But I can’t. So, I live with a very particular struggle because, though I wouldn’t wish this on anyone, it is only because of their disabilities that I have had the opportunity to know them now. And I can’t imagine not having them in my life.

When I grow up, I want to be like Mike and Caroline.

Thank you for sharing this. It's a challenge of the times, and the culture we live in, to remember the importance of living as Human Beings...and not as just \"human do-ings\".