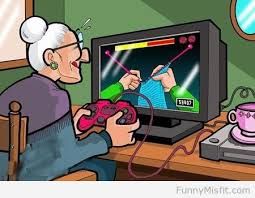 About 10 years ago, my uncle bought my grandmother a computer. At age 73, she learned how to email, Google her medications, and make greeting cards. But what she enjoyed most was playing computer games. Wait, let me rephrase that—she was obsessed with playing computer games. Now I should mention that Grandma already had an addictive personality. She used to drink every weekend, smoke two packs a day, buy lottery tickets, and take day trips with her neighbor Miss B. to play the slots in Atlantic City. Don’t get me wrong, Grandma was never an abusive, fall-out drunk. She just had her “harmless” vices.

After retirement, Grandma stopped drinking. No 12-step program for her—she just went cold turkey. Miss B. passed away, and Grandma’s gambling trips ceased. And after eight decades of smoking, she willed herself down to one cigarette a day.

Yet Grandma continued to play her games. Sometimes she would stay up ALL NIGHT on the computer, then sleep during the day. At times, I felt like Grandma had just exchanged one addiction for another.

Now, I thank God for that addiction. Grandma can’t read very well anymore. She can’t knit. Conversation is difficult. She doesn’t understand anything that’s on TV. (Then again, who does these days?) Shortly after the stroke, she would stare longingly at her computer, remembering that she used to do something on it, but not quite remembering what it was. Until one day, I checked her internet browsing history. There it was—Bouncing Balls. Grandma tentatively rested her hand on the mouse…and her reflexes kicked in. An hour later, she was still playing—and winning. Since she played so much over the years, her skills came back naturally.

Playing computer games often distracts Grandma from constipation, sciatica, and the reality that she’s not the same person she once was. Gaming takes her to a world where everything is as it should be, where red is red, and blue is blue, and the rules are the same. I long for the day that we’ll discover the other games that she used to play (all others were erased from her browsing history). And I dread the day that her cataracts and decreasing cognitive ability will make it impossible for her to play. But in the meantime, I stand in awe of the woman who inadvertently prepared herself for the onset of dementia through her online gaming addiction.

Hi--Your grandmother has such a spirit! She sounds like someone who likes adventure and likes to keep learning. I'm so glad she's back to her games. It sounds like they give purpose to her day and as well as a thrill. Such a good idea to check her browsing history. !!