0
Dad passed away just before midnight on Monday, November 5th. Days before, he had told me, "You know, 93 is right on the brink, but 94? You might as well pack your bags." He didn't feel "peachy keen" anymore, though he still often said he did. He confessed to me one day that he felt like "horse doo-doo", strong words for my dad who never complained. He had been diagnosed with pneumonia a few days before. He also said, "This is a funny thing. Either I'll get over this or I'll just go." I asked if he'd decided which he'd do and he kind of chuckled and shook his head no. "But at least Mom is taken care of and all the funeral plans are made." He said this very matter of fact.

When Dad couldn't walk anymore, my sister and I took turns to stay with them. The facility staff does not do transfers or help with toileting. After Cathy left, I just moved in with them to help out. Oddly enough, though he was clearly getting weaker and weaker, his vital signs remained normal and the palliative care nurse didn't feel he was necessarily ready for inpatient hospice. So, as a way to get him some help and evaluate further, they recommended having Dad go for a "medical respite" at a nursing home in town. He was transported Monday evening. I followed and stayed with him until 9 that evening. We called Mom from his room and he told her that I had gotten him settled into the hotel.

Before I left, he asked if I'd be there first thing in the morning. I certainly was. The call came right before midnight. Dad's stay at respite care had lasted about 7 hours. I truly believe Dad's leaving for the respite care gave him the permission and the space he needed to leave. I feel very much at peace with his passing.

I'm glad Cathy was able to come out one more time last weekend, and that our brothers, Tom and Dave, had been out very recently, too. True to Dad, he waited until everyone had gone home. I'm sure he didn't want to upset their visits. And up until the last, he was trying to feed us all, offering us the desserts that came with his meals - heck, he offered us his meals, too, and a bottle of Ensure, if we wanted one!

He was my dad, and in the last ten years, my confidante and my ally. I will miss him terribly. 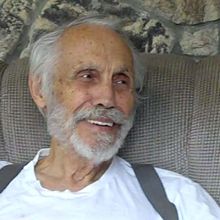 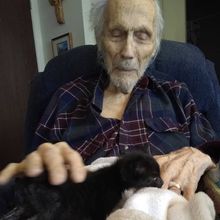 Goldie, I am so sorry about your dad! I can hear your heart break and how much you must miss him. He was a good father and such a good friend to you. He made so much which was quite difficult much more bearable. Please keep us posted on how you're doing. I'm thinking of you and sending you all my support.

Goldie, prayers for you and your family during this time of loss. What a beautiful tribute of love for your father. Your love and his love has been so evident. Thank you for sharing your dad was this us these past years. Hugs.

Thinking of you and your family, Goldie, on your dad's passing, and deeply thankful for being able to walk with you on the journey these last few years.