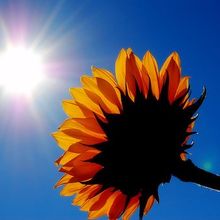 My granddarlings, ages eight and five, recently looked at a small crack in my ceiling and announced that my house might fall in any day  now. I think so many disasters in the news have made them super sensitive. Of course, we live in Southern California, land of earthquake, fire, flood, mud slides and oh, yes, sunshine.

The girls gave me strict instructions to run to my car, drive to their house and move in with them. They repeated the instructions and then went back to their play. Later on that day they came to me again.

"If your house falls in come to our house but grab Papa first."

"Yea, first grab Papa then come to our house."

I smiled at being told to "grab Papa." Papa has been bedridden and partially paralyzed  since his stroke in 2012. Papa and I live together on a hill with about 19 steps from the street to  the house. Once about four years ago Papa asked me what I would if there was a bad earth quake. I said, "I would get you and myself out of here as quickly as I a could."

He shook his head and said, "Just save yourself." I must say I like the kids' idea better and if there is ever an emergency, I will do my best to "grab Papa."

I have often been asked what would I do if there were a fire or something like that. My answer always is...the best I can! You would be surprised at the strength we have when faced with adversary. Never in our lives did we ever expect the role we are playing.

Absolutely the sweetest words ever. You've been grabbing Papa in love every day and your beautiful granddarlings see that so sweetly.