Goldie
In the last two weeks, several things happened which made it hard to check in and connect with everyone here. The first thing was, my computer crashed. It crashed, oddly enough, while a Microsoft employee was working on it by remote. A long, sad, and ultimately, unbelievably boring saga later, I have my computer back. The tech in our local computer repair shop says it's on borrowed time. I was not amused.

I've been getting numerous calls from the PACE program my parents are enrolled in, as it's the New Year and they are being scheduled to see every doctor in the system... and dentist. We must not forget the dentist. The fact that they are scheduling these appointments must mean their Medicaid was approved. It also means I will be driving them a lot. If we sign them up for the PACE bus, Mom will cancel.

And, our son and daughter-in-law decided they are relocating to the east coast area. This is not a surprise. They met back east and her dad lives in New Hampshire. My son had two job interviews over the last week. My daughter-in-law wanted to come along to check out the schools for the kiddos and see the towns.

Grandma was on duty. Today was our last day and now Mama and Papa are back home and Grandma can relax. It was an exciting time...

Watching grandchildren for 9 days is a daunting task; one I loved, but daunting, nonetheless. It's so easy to get things wrong. I didn't make porridge like Mama does. I didn't make enough spaghetti. My attempt at crepes was met with skepticism. They were eaten, but I was told their Mama's crepes are super good, they are perfect. Tonight, our last dinner together, I thought I'd go easy on myself. We got Thai food from the restaurant they frequent. It's not easy to figure out exactly what they like and connect that to a menu item. Wouldn't you know it, the noodles were all wrong.


On another note, we also decided to clean the house (a little), and get flowers and a welcome home balloon for Mama and Papa.. and make cards for them. Okay, okay... I know. It was me who decided we should do this, not them. It wasn't hard to convince them to play along, but it didn't go quite as I thought it would. (20 years as a kindergarten teacher, I should have known better). The drawings included funny faces and the words poop and pee figured prominently in their sentiments... oh, and butt hole.

At the store, the kids made it clear we needed to get three balloons. The oldest had even brought a pocketful of change in case we needed more cash. 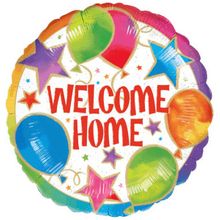 We got three "Welcome Home" balloons, one of which was fought over until I pointed out that another had both stars AND butterflies and anyway, the balloons were to welcome home their Mama and Papa! At home, the kids, each with their favorite balloon - as in "that one is mine", ran around the house, the boys chasing their sister. Their sister ran into the kitchen where I was and let me know that HER balloon didn't like to be with the other balloons, AND its name was Sarah. The other two balloons had funny faces drawn on them by the boys.Flowers, at least, were just for adults. They chose some lovely white roses...and ignored them as quickly as we got them. They looked nice on the table, anyway!

Whatever we accomplished, their Mama and Papa will have no doubt they are home once again.


And Grandma gets a day of rest tomorrow. Until Monday. Then we start with all the appointments for Mom and Dad.