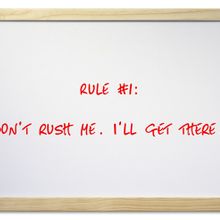 (The following is a loose paraphrase of a conversation I had with Grandma.)

We were at the breakfast table, talking about my upcoming visit to the Dominican Republic. I’ve been preparing Grandma for this trip for the last few days, reminding her that I would only be gone for a week.

“Who’s going to take care of me while you’re gone?” she asked. I was pleased to hear no fear in her voice, just curiosity. “Who’s going to be on your team?”

I chuckled. “My team? Don’t you mean, your team, since they’re taking care of you?”

“No, I mean your team, because you’re the one who puts everybody in position.”

We reviewed her weekly schedule on the white board. “Who comes today?” I asked her.

“Oh right! Derrick. I know him. That’s my nephew,” she said proudly.

“You’re my niece…no wait, you’re my granddaughter. So Derrick’s my grandson.”

“Right,” I confirmed. "He’s coming today. He’s going to take care of you the first two days. He called me the other day, said he’s really looking forward to spending time with you.”

She eyed me warily. “Yeah, but he doesn’t know about the washing,” she said, referring to the showers I give her.

“That’s true, but you won’t need a shower while he’s here. He’ll just be here a day and a half, and then…” we checked the schedule again.

“Friday,” she stated. “Your mother comes.”

“That’s right! And she’ll be here all week. And then before you know it, I’ll be back!”

She sighed deeply. “I just hope that your mother doesn’t rush me. She always wants me to jump when she says jump. And then I just SHUT DOWN and I don’t do anything!”

“Grandma,” I stated firmly. “You have to remember. I spend all day with you, and I’ve learned how fast you move. Mommy is just learning that, and she’s gotten a lot better about it. But you need to be patient with her, just like you expect her to be patient with you.”

“I don’t have any patience. This sickness took it all away.”

I gave her a stern look. “Just because you’re sick doesn’t mean you can’t be nice.”

“You still have to treat people right,” I emphasized.

“I know, you’re right. That’s why I didn’t say anything. I know how to shut my mouth when I’m wrong.”

I laughed out loud.

She sighed. “I just hope that everything goes alright, that people understand how to take care of me.”

That’s when I got the idea about Grandma’s Rules. I whipped out my smartphone and pulled up the Notes app. “Okay, what are some rules that you have for my team?” I asked her.

We never got further than that first rule. And I suspect that’s all Grandma needs, which is to have some input about her care. I printed out the rule in bold print and taped it to her bedroom wall.

We talked about other things—such as what she thought about her new home attendant. “She’s alright…but that’s really all I can say about her.”

Just before I helped her get into bed for her morning nap, she looked up at me and declared. “I’d like to give you some money for your trip.” She thought about it for a moment. “Do I have any money?”

“Yes, Grandma, you have plenty of money,” I reassured her, exaggerating a little. “But do me a favor—save it for me until when I get back so that I can buy some winter clothes.” I want to keep reassuring her that I’ll be back, and that we have the winter and many more adventures ahead of us.

“Okay, let’s do that then. I’ll talk to your uncle about getting some money out the bank.”

Knowing that she wouldn’t remember the conversation when she woke up, I simply responded, “Thanks Grandma.”

Thanks for the wonderful comments_mysql!!! As always, they were very encouraging and inspired me to keep writing. I love this community.

Denine, you have a great patience and a wonderful outlook. I love how you two communicate and I love Grandma's rule. I think that's a good rule for anyone to have.

I love this, Denine! I love the give and take, the allowing, the love and respect you both have for each other. The candor. You've got a great team. Have a terrific and relaxing vacation!

Denine--I have to agree with Pegi. What a great conversation with your grandmother!! I love the honestly, the commitment, the respect. Just beautiful.\r\n\r\nI also think your grandmother's rule is kinda like the rule that life wants for me. Life often tells me, \"Don't rush me. I'll get there.\" I want life to happen right now. Life happens on its own time table. And, it's often a better one that I could create. :)