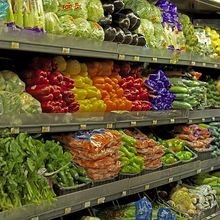 The changes in my mom's cognition have been very gradual, and most of the time it's hard to pinpoint when and where the change happened. But the fall she had this summer is starting to be a dividing line. Before the fall, even though she was having memory problems, she was still living quite independently - driving to doctor's appointments, picking up my son after school, shopping and occasionally cooking. But now she either doesn't do those things or does them only with my help.

This morning, she said, "I was thinking I need to go to the grocery store today." I hadn't planned to go nor wanted to, but jumped in on cue with, "How about if we go together? I need to pick up a few things too." She said that was fine and then said she was trying to remember what she needed. I helped her find a notebook she keeps by her chair and suggested she make a list while I got ready to go.

Later, we got to the store and she took out her list, and it was really not helpful! She had written down several things we had just bought a few days ago on our last trip. After we talked about the list and determined that she already had plenty of most of the things on it, she said, "Well, I made the list by thinking about what I use rather than checking to see what I'm out of."

Fortunately, I look in her refrigerator and freezer daily and keep tabs on paper towels and TP.  A few years ago, I would have been exasperated by her illogical grocery list, but now I accept that her cognition is declining and it's not just memory, it's the ability to organize and make plans. And I'm so glad that I'm not exasperated with her, but I'm also so disheartened.

LM--I totally agree with @woriedwife! You are wonderful with your mom. I love to read the stories of you, your son and your in-the-background husband :) interacting with your mom. You've got a great family.

Thank you, <a href='http://www.caregiving.com/members/worriedwife/' rel=\"nofollow\">@worriedwife</a> - I need to come back and read that message the next time I'm having a bad day. :-)

I have such a similar situation with Yvonne. Independence is something no one wants to lose, and no one wants to be the one to take parts of it away; however, there comes a point where we have to find a balance. I think you've done great! Notepads and sticky pads are great tools (my house is primarily built from sticky pads) and they help to give more voice to your Caree about their choices and input. Keep up the great work :-)