H.D. (No, Not Your Flat-Screen Television)

H.D. (No, Not Your Flat-Screen Television)

Mike
(Editor's Note: We welcome Mike, who cares for his wife, to our blogging team. You can connect with Mike on his profile page, @mistermike40, and during our evening chat, which Mike regularly joins.) 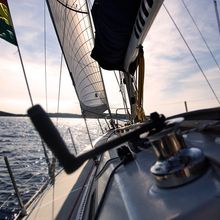 H.D.  Huntington's Disease. I had never heard either term before I met Joanne, my wife-to-be. Our paths crossed in the summer of 1988 during the middle of a record-setting heat wave in southeast Michigan. We spent many of our days swimming and watching sailboats glide across Lake St. Clair... then taking long walks together after night had cooled the air. The attraction was mutual and immediate, and blossomed into love before the heat wave finally broke.

After we both realized we were going to be more than friends, I could tell something was weighing heavily on her. During one of our walks she tearfully told me about some affliction that had taken her mother's life and that she had a 50% chance of inheriting this same condition. I assured her it didn't change anything between us (and it didn't). My 28-year old mind rationalized that if Joanne was ever affected with "Huntington's", there would either be a cure or (at very least) some type of treatment to manage it.

Soon after that summer we were engaged, then married the following spring. I noticed how close her extended family was... their annual family reunion often had close to 100 people. As those early years passed I also noticed that every few years another member of her family would be stricken with H.D. We would see them and their worsening physical condition for the next year or two or maybe three, then they would stop coming to the reunions and the next we would hear about them would be the funeral arrangements.

Interlude - when I started this blog I wasn't certain where it was going... exactly how much I was going to share. I realize that most people either never heard of Huntington's disease or (understandably) know very little about it. In a nutshell: it's been called the “Worst Disease Known to Mankind” (a link to a short series of articles:  https://adellegabrielson.wordpress.com/2015/09/23/huntingtons-disease-facts-not-fiction-about-the-worst-disease-known-to-mankind-part-i/ ).

To quote Lisa Genova (author who previously wrote the novel "Still Alice" about Alzheimer’s disease):  "Imagine having ALS, Alzheimer’s, and Parkinson’s... at the same time. Huntington’s disease (HD) is the lesser-known ugly cousin of such neurodegenerative disorders."

Back to our story. Many happy years passed before - after being trapped in the "hospital maze" (her very descriptive term describing her ten-month journey away from home) - Joanne was diagnosed with H.D. Today, me and our youngest daughter sit with her, comfort her, try to engage her in simple activities, empty her catheter bag, change her brief, crush her meds to give through the g-tube, provide encouragement, prepare her tube feed for the day... things we do out of love. Yet I know all of these things we do are breaking her heart -- it's *exactly* what she never wanted for her family. This is what she lived through during her teenage years, caring for her mother.

The young woman I fell in love with is still in there. No matter how this disease causes her to act, or whatever it causes her to say (or not say), or do (or not do), I can always look into her eyes and see Joanne. She's still in there. But I also know she is sad and terrified, and wishes her life could be anything but this.