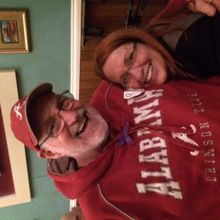 Rod has been in a pretty prolonged slide with his FTD lately. He now has a speech therapist as well as a physical therapist. We thought he had a swallowing issue, but seems it is an esophagus issue. Food goes down and makes a screeching halt in his esophagus. On top of that, he went for his 3 month dental cleaning and he has an abscess and the general dentist suggested dentures, which are pretty much out of the question, so we will be going to the geriatric dental practice at Emory to see where we go with that.

He had his meds increased recently because he was having some outbursts. Last night he was very annoyed at the dogs. He went to bed and closed the bedroom door, knowing he had lost his temper. I waited a bit and went in to talk to him. He said, "I know how people feel when they feel useless. I can't remember to do things and I get angry when I shouldn't. I feel useless." I assured him of the many things he still does and how helpful he is around the house. My heart broke. He is so aware of his FTD that it can be a curse.

But here is the good part. We hired a 15-year-old high school boy to help Rod in the yard. You know he loves his veggie garden. We had raised beds to make it easier for him this year. Well, we hired Caleb to help. Caleb has been a joy. He is such a happy, grounded young man who is saving for his first car by working. He has become a family member to us. I found Caleb on the next door app. His mother posted that he liked working in yards and often helped the elderly neighbors in their last location. We had her and Caleb over, explained FTD, and offered Caleb a weekend job. He accepted.

Rod loves Caleb. To watch them work together is like watching teenage siblings. Caleb laughs with Rod, teases Rod and genuinely likes Rod. Last week they went to Home Depot together to window shop for a new project. I dropped them off and then did a couple local errands and came back for them. They got in the car and were laughing about their experience in the store. I told Caleb that he needs to always keep his humor, that laughter gets us through most everything these days.

This morning, Rod and I lost a friend, Susan Suchan. Susan was an inspirational advocate for dementia. She had FTD and Alzheimer's. She was one of Rod's first FTD friends. She thought he was crazy and he loved to hear her talk, she had PPA and he thought she talked like Yoda. They laughed a lot. She was part of our FTD calendar. Every picture is her beaming smile. Nothing ever got Susan down, she knew how to laugh and enjoy every minute of every day. We will miss seeing her at conferences, Rod will miss seeing her on his Zoom meetings and laughing with her. He has a hard time showing emotion, but Susan's freedom from this disease has hit him hard. He sees his declines and thinks, am I next?

Caleb will keep him laughing, so in loss, we found happiness. The joyous laughter of a teenage young man, wise beyond his years, will keep Rod laughing. Rod and I will do our best to keep FTD advocacy moving forward, in honor of our friend, Susan. Yes, Rod is progressing, but we are doing it laughing, in honor of Susan, too.

Oh Sharon! I am so sorry about the frustration. It seems like Caleb was found at just the right time. The name has several meanings, faithful or whole-heartedl! Caleb in the Bible was a leader and it sounds like your Caleb is leading Rod into a new experience with humor and faithful weekend visits! What a delightful post in spite of the progressing of FTD!

Thanks for continuing to share, Susan, with all the ups and downs. So glad Caleb is in your lives.