0
Funny how caregiving gives you a different perspective on life.

For the last two weeks my mother has been wetting the bed.

This is my mother, Mrs. Clean, known for crawling on her hands and knees through the shag carpet to remove dog hairs one by one. Now in the uncooperative dementia state, she refused to wear any type of incontinence product or even it's adopted sister, a pantyliner. My mother would rather lie in bed, enveloped in her stinky clothing amidst wet sheets and blankets.

This caught me unawares (really?) as she never in the past experienced the slightest incontinence issue. And suddenly we were jumping over the baby steps and into the Deep Waters.

I tried putting pantyliners in her underwear and leaving those undies out with her day's outfit. She rolled up and hid those, and put on un-armoured ones. I bought lovely expensive designer-embossed depends that (in the picture) looked just like her regular briefs. Of course out of the package they still look like crepey paper diapers and although I filled her underwear drawer with them, she refused the option. Appealing to her sense of "clean" which I hoped resided deep down inside somewhere, I urged her to put them on. She wailed plaintively to me, "Then I'm wearing a pad!" I said, "And the problem with that is???????? 90 % of American females are wearing some kind of contraption every day of their lives. This is not news!" Finally on the smart advice of another caregiver, I took all her regular underwear away and just left the depends. "Theirs not to reason why, Theirs but to Depends or die." She still refused.

I spent Friday doing laundry for at least five hours. Of course she couldn't just wet the bed, she had to wet the bed, take the wet sheets off, roll them up in the blanket and bedspread, go in the bathroom and put on a towel, take off all her clothes and put them in the sink full of water and then try on some more clothes, and get back in bed. A six-year old boy showing off his aim in the woods couldn't whiz on as many surfaces as my mother. I knew this was something I would have to "manage" but not "control".

And then Camelot happened.

Yes, Camelot, my boy!
Where once it never rained till after sundown,
By eight a.m. the morning fog had flown...
Don't let it be forgot
That once there was a spot
For one brief shining moment that was known
As Camelot.

For one brief shining moment, my mother's dementia cleared. My real mom came back and she willingly put on the depends, understood why they work, and has been wearing them ever since, even though her darkness has returned.

From where I stand today, just today, a dry bed looks a lot like Camelot. 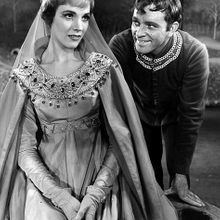 Thanks, MIssAngie. I appreciate your recognizing my effort. Sometimes that's all I've got to feel good about! ha

I'm late on replying but this was so well written. I have gone through these events as well in my Kingdom. Graceldoor my mom's Lord of The Rings name, is finally wearing her depends as well.

It does sound like a miracle! I hope it lasts!!

Oh, your post brought back memories for me. I cared for a woman named Evie who hated to wear incontinence briefs. She was 82 but had a strong arm--and would throw the briefs at the wall.\r\n\r\nSo, I appreciate your Camelot. It's good to be in Camelot. \r\n\r\nAnd, oh, my gosh, you made me laugh several times during this post. Thank you. Exactly what I needed. :) You're awesome.