Heart Attack From a Spouse's Perspective

Heart Attack From a Spouse's Perspective

My husband was recently in the hospital for a light heart attack. Here are things that went through my head. Be afraid. Be very afraid.

(These were my thoughts during my husband's cardiac catherization. During the cath my chest hurt. When the nurse called to say he was doing okay, my chest stopped hurting. )

Cardiologist: "It was a light episode. We'll put you on medicine. We don't know what caused the attack- it could have been pain, a virus, a blood clot. There's a possibility you may get to go home today."

Attending: "I want to keep you another night to do tests."

Attending: "He had a heart attack."

(Okay. Take some Ativan. Jerk. I wanted to clarify because, gee, I'm his wife and wanted to know about his condition but White Rabbit was apparently late for an important date.)

Later, after going to my brother's for a shower:

Scott: "He took me off the Nifedepine." This is a blood pressure pill that helps control his movement disorder. The med the doctor talked about reducing but not stopping. Scott then started having muscles spasms.

(If he gets worse because of this idiot I'm going to hunt him down.)

Doctor puts him back on the BP med. His spasms stop.

(No. We want to stay in your charming presence.)

"You have a little bit of heart failure. Thank you for listening and staying. Since you wanted to stay on the Nifedepine I decreased the Lopressor."

(Thank you for listening. I didn't want to have to kick your butt.)

Now he's home and doing okay. He keeps his nitroglycerin nearby. It's his new best friend. 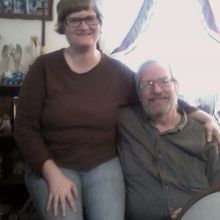 Oh I have said them out loud in the past. I've made some friends in the medical community that way. :)

Aww, so glad everything did work out AND the meds weren't tweaked tooo much! Kudos for your patience but quiet advocacy! You are strong!!! I love your humor! Keep us updated!