He'll Be the Captain Until Two Days After He's Dead

He'll Be the Captain Until Two Days After He's Dead

0
(Editor's Note: We welcome @tiredbutdetermined, who cares for her dad, to our blogging team today. Be sure to send her a note of welcome.) 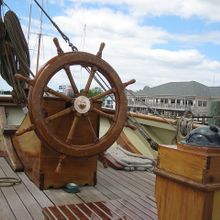 Ah, my Dad. 6'2, 280 pounds, 87 years old and a complete and total handful. He's a retired river boat captain, and accustomed to being the man in charge. In his job, he held a great deal of responsibility and authority. Even though he has been retired for well over 20 years, he still insists that he "will be the Captain until two days after I'm dead." He loves to tell everyone this--I'm not sure why, but it has become his tag line. What a handful!

Since Mom passed 2 & 1/2 years ago, he insisted on living alone in that big old multi-story house, surrounded by over two acres, on a hill, on the outskirts of a small town (population 600) that is nearly an hour's drive from a grocery store, doctor's office and a hospital. Oh, and did I mention he was still driving? OMG. I'm over 800 miles away, and although my brother lives within a 30-minute drive, Dad stubbornly refused to allow either of us to help and heaven forbid we attempt "The Conversation" (you know the one, about moving to a retirement facility). Finally, the inevitable happened and Dad fell at home and injured himself. Emergency room trip, stitches, self-care (his way, not the doctor's way), a severe infection, a two-week hospital stay, and a month-long rehab stay. Finally toward the end of all this he agreed, begrudgingly, to relocate to a senior living (assisted living) facility near me.

I knew this would be a big change for him, and for me. I'm married with two teenagers, and I work full time with an hour-long (each way) daily commute. I haven't lived "back home" for nearly 30 years, so he had stated that even if he only got to see me two or three times a week, that's better than he's had in years. And he can see the grandkids. His initial reaction was great--he liked the facility, food was good, coffee was GREAT (that's very important to him!), he likes his apartment, teases the caregivers and nurses, made friends with some other residents and enjoys sharing meals with them each day. So far so good. I've been stopping by nearly daily, helping him get settled and taking him out a couple of times a week to watch his granddaughter play softball, go to brunch or dinner, get a haircut, etc.

Now that he's been here for a couple of weeks and the excitement and newness is wearing off, it's all starting to get real. This is his new normal, and he's not so sure about it. The reality has hit him that he will no longer drive, that he can't just come and go as he pleases, that the city is not as pretty as the countryside he just left, that he really is going to have to figure out how to use that cell phone, that the chef is not just going to whip-up some beans and cornbread on a whim when the menu has been planned a month in advance, and that when I take him out for a few hours, that it will totally and completely exhaust him. When I pulled a borrowed wheelchair out of the back of my SUV at the softball fields last weekend, he first balked at using it. Then when he saw how far away the fields were from the parking lot, he dejectedly plopped himself into the chair and allowed me to help him. He has always been strong and hard working, but his big old body just doesn't function like it used to. Honestly I think he will get stronger--he is still recovering from his injury and subsequent illness--but he'll never be 25 again, or 38, or 47, or whatever age he so desperately wishes he could be.

This morning he told me he feels like he has no purpose in life now, and that he hasn't had one since Mom died (she was ill for many years and he was her caregiver). He was always someone that everyone went to for direction, for advice and for solutions. He could--and would--fix anything. He was strong and able, and proud. Rather than view the care he is receiving now as something he has earned and deserves, he views it as weakness and defeat.

I am struggling to find ways to help him feel useful. He needs something to worry about, a problem to solve, a torch to carry. I certainly have more than enough on my plate. (I've learned more about Medicare, trusts, power of attorneys, veteran's benefits and managing someone else's finances in the past three months than I ever cared to know.) But as I look at my list, I cannot find things that I can turn back over to him. Perhaps I can find a charity or other volunteer organization that has something for him to do--even if just a couple hours a week--where he can feel he is contributing and adding value.

This old Captain needs a boat to run.  Don't we all?

Welcome, TBD! Your dad sounds like an amazing man and a force to be dealt with. It must be so hard for him. Although not the same as a spouse, I was lost after my 10 year caregiving stint for my MIL was over... finding new direction is difficult and at 87, must be so hard. You sound like an amazing daughter and on the right track. I'm glad you found us. Love Denise's suggestions... her few thoughts yield so much.

I know someone whose father was a renowned surgeon. When he had Alzheimer's, they kept an office for him at the hospital so he could come to work each day. They would find little things for him to do or just talk with him.

Getting his stories on tape would be amazing! My brother helped my Dad write a novel at age 85. Dad drove till he was 90. He has also been the caregiver and still is with Mom in assisted living.

Hi TBD!! I'm so glad you are blogging! I've found blogging to be a combination memory keeper, comforter and releaser. I hope it will be the same for you.\n\nYou dad sounds awesome. Has he recorded or jotted down his life story? I wonder if that could be a boat for him to captain--documenting his story. I bet he has some amazing stories. \n\nCould he also organize and label old family photos?\n\nWhen he attends the kids' games, could he be the statistician? \n\nJust throwing out some thoughts. We'll help you figure this out. :)