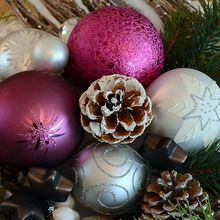 No I did not fall off the planet though it does feel that way sometimes!

I have missed blogging and chatting with you all. I finally caved and went to see a doctor for myself (wow, what a thought!) a few months ago and came out with nine prescriptions -- guess it isn't good to procrastinate and avoid doctors! It has taken me a long time to get used to taking so many meds and it seems my system doesn't want to work properly. The doctor said it could take me a few more months until I start to feel better because I was so severely depleted in absolutely everything. So the housework and garden work has been put on the very back burner. I haven't had strength or energy to do much extra beyond caring for Mom. I figure the dust isn't going anywhere and it won't tell anyone (if it does I have more problems that I originally thought!)!

I have been busy with Christmas orders as well. Mom's bed broke earlier this year and so all the money from my sold items is going towards getting her a new bed, some friends have also donated to the cause. It seems everything happens at once! I ended up taking her back to the hospital last week because she has this BEYOND HORRIBLE cough that was getting worse and worse. She coughs SO hard that she is continually popping out her ribs! I have had to have the massage therapist come every single week to try to get her ribs back in place! Along with her cough, her bowels have been terribly messed up and it is only getting worse. I feared that she was severely dehydrated and I didn't want her body shutting down. Within 15 minutes of eating she was racing to the bathroom. She couldn't keep anything down since August 22nd. On top of all of that (as if that weren't enough) she felt like she had another kidney infection. (She only has one kidney and it is only working at 40% plus; she has passed five kidney stones within the last five years.)

Finally I convinced her to go to the hospital. This time I drove her (no ambulance -yay!) and was able to be with her the whole time. Amazingly the nurses were so very kind to her. They actually listened to what we had to say and were gentle. I am so happy. I always bring candy with us as a bribe to the nurses and they were very thankful for the treat.  The doctor finally came in after chest x-Rays, bloodwork, urine samples and a CT scan and said that he thought she had whooping cough and C diff.  She didn't have a kidney infection. Her blood glucose was in the high 400's. He said she wasn't doing well but since none of it was life threatening and since she is a chronic patient he was sending us home and we were to see her GP. I explained that she doesn't have a GP and he said it wasn't his problem. He doesn't deal with chronic issues, just emergencies. He really didn't know why we were there.

I gently told him that I feared that she had yet another kidney infection which is dangerous for her, that is why I brought her in. I was also concerned that she was having up to 20 BMs/day most of it diarrhea and I didn't want her electrolytes going wonky on her and I didn't want her dehydrated. I was concerned because I was unable to control her diabetes, and I was concerned about her cough. All of these issues didn't seem to bother him and he said just go to the GP and deal with all of these things. So he sent us home. He did give antibiotics for the whooping cough and meds for the C diff. infection. It was the quickest hospital visit ever!

We were happy to be home but unsettled that he didn't seem to care about all of these things. I guess you can't make a person care. He was upset that a chronic patient came in. I tried to explain that we were stuck without a doctor but it didn't matter to him. I have told Mom that we do need to take a trip after the New Year to Vegas and see if we can get admitted into the hospital and get everything taken care of. Her cholesterol and triglycerides are so highl they are stroke and heart attack levels. The CT scan revealed that Mom's liver is enlarged and her numbers are double where they need to be. We need to get that taken care of. Her pancreas levels are also high. We need to get her diabetes under control as well as her bowels. If it was just the R.S.D. I think it would be easier, but it seems all of her systems are not doing what they need to do! All of it hits at once!

This morning, before I got out of bed, I was praying about all of this, asking for comfort and peace, strength for her to endure all of her agony and suffering. She has been having severe headaches again and just a lot of muscle spasms (while in the hospital her O2 levels were in the low 80's). I have had her on O2 24/7 to help ease the spasms and to help her breathe. I dragged myself out of bed to check on her and when I went into her room she was giggling and touching her face --  she had the BIGGEST smile I have seen in a long time! She screamed, "I CAN FEEL MY HANDS AND FEET!" She was giddy as a school girl!

For the past nine months, she has suffered from "depersonalization and numbness" in her hands and feet, a side effect from her detox. Her hands and feet haven't been her own -- she said they were numb, hurt, and felt like the belonged to an old man. She couldn't put her hands or feet together. She said washing her hands or face was beyond gross because it felt like someone else was touching her. She couldn't even explain what it felt like but you could tell she felt like vomiting whenever she touched anything! Getting dressed and changed was a nightmare because some old man was touching her all over. It was horrible. We didn't know how long this would last or if it would ever reverse. But this morning she woke and touched her arm and it was her touching her arm!!!! I just started to shed tears of complete joy. I asked her to touch my hand and she did! I can't explain the joy I felt. I felt 500 pounds lighter!!!! We are SO thrilled that the Lord healed her brain and that she has hands and feet again. While she rested I cooked a celebratory meal in honor of the Lord's healing. I made Indian Beef Curry over brown rice with Indian fry bread. She was able to eat and not be grossed out. After we ate I massaged her feet and hands. This is the first time I have massaged "her" hands and feet and not some old man's. LOL! She said at first that it felt really weird but then it relaxed her. About 45 minutes in she fell asleep and has been sleeping for over an hour now. My heart is overflowing with thankfulness and joy.

So that is about it from our end of the earth. I am planning on baking some Christmas goodies to give away tomorrow. I finally got Mom's 3-ft. pink Christmas tree up and decorated.  I usually decorate the whole house and bake hundreds of things for people all over town, but it just isn't happening this year. And that is okay. I am letting myself off the hook! It is empowering to be able to do it! Blessings to you all and I pray that your Christmas season is warm and bright, your days are as easy as they can be, your carees are as healthy as they can be, and your heart is overflowing with joy.

Hurray for your good news!!\r\n\r\nI'm so glad to hear from you, LH. And, thank goodness you could get to the doctor. I hope you also are feeling better. \r\n\r\nWishing you and your mom more miracles and many blessings this holiday season.

So good to hear from you. How wonderful that the \"old man's hands\" are gone! Very glad to read that you are taking care of yourself. Hoping that in the New Year you can get the answers and solutions you need regarding your mother's care. Keep us posted as you can. :)

Hi, and thanks for filling us in on all the news from your home. I wish you and your mum a Happy Holiday, too. How can you miss with a pink Christmas tree? Now that's what I call celebration!\r\nYour tender care and complete devotion to your mum's care is amazing, with all the paths you have been down together. I'm sorry to hear about the heartless doctor, but I'm rejoicing with you that she can once again feel her hands a feet. You both deserve that long-awaited miracle. I will hope also that in the New Year you can get her to a doctor/hospital who will look at her total condition and offer new answers and treatment. Take care.

I\"m glad to hear that you have gotten some health care for yourself--good for you! And that's great your mom has improvement and has her \"own\" feeling back. I'm glad you updated us...