0
Why am I putting myself through this, allowing my mother with dementia to continue operating in the kitchen? It's not like you can stand her in the corner with a dunce cap, or put her in the Time-Out Chair. She may have the mentality of a child but she has the muscle memory of an adult and she'll take off the dunce cap.

She spent her life as Mistress of the Kitchen, keeping everything neat, clean and in order. Now all the fuss-budgeting and fiddle-farting impulse is still there but none of the pieces fit. And I'm trying to let her have independence and mastery, "to a degree".

That said, not only must I be in the kitchen with her, I must be watching her every single move. Last week in the time it took me to look down at my computer screen and say, "Eureka! I found my long-lost relative on Find-A-Grave!", I heard a pop, saw flames, and a large pyrex bowl (vintage, I might add) shattered on the electric stove and dry tea bags exploded. I had been monitoring her making a cup of tea, but quick like a rabbit, she had turned on an additional burner, and now the house smelled like we were pot-heads. No one got hurt, and now I turn off the stove at the breaker box. BUT HOW QUICK IS SHE???? The next day we bought a pizza; setting the pizza box on top of the stove so I could reheat it, I went to the garage to throw the breaker, came back inside and all ready she had turned on a BURNER instead of the oven. Again, no one was hurt and I'm glad I didn't decide to check the mailbox, too. One more "glance over the precipice" and lucky I didn't lose my footing.

She has been obsessing with curlers. Curlers in travel bags, boxes, zip-lock plastic. We had a slight incident when she wanted to put curlers in my chicken casserole. On another occasion I got up from a rest and said I would start dinner, and she said, "It's almost done", and had curlers in bowls, covered in napkins. Last night she neatly poured a baggie full of buttons into two corelle bowls, added two spoons, and pronounced they were for Dad and me. This is signalling an entire new zone. I said, "This is not food. Do you know this is not food? Do you know what this is?" "Buttons", she said. "We don't eat buttons, buttons aren't food, are they?" I said. "No", she said, "But if you don't want to eat them, you don't have to."  We won't even mention my dad has been dead four years.

So today I cleaned off the kitchen counter and got rid of all the curlers, clothes, papers, magazines, and buttons, all the non-food items. And I replaced them with five bowls full of assorted wrapped Halloween candy. She can fuss-budget and fiddle-fart to her hearts' content. If she's going to fuss, at least fuss with something edible. Or before too long I may start swearing like Gordon Ramsey and wish I had a little of that pot. 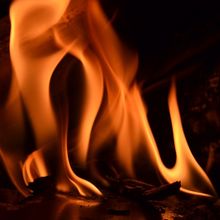 I love reading your posts and enjoy your humor! I was advised to throw the breaker to the stove so that Elly wouldn't get into \"trouble\". I think you have a full-time job keeping on your toes!! Having little distractions around the house or introducing projects is so time consuming and mind-stretching! You are doing a Great Job and deserve to act a little \"Gordon Ramseyish\"!!!

I have worried so much about how to cope with Mom's kitchen use as her memory declines. The breaker box is something I had never thought of! Also, the Halloween candy idea is brilliant. :-)

I'm with Jean -- reading your posts always brings some comic relief, although I know it must be exasperating for you. Thanks for sharing.

Maybe your mom should have some pot too! LOL. Reading your posts always gives me a chuckle at some point… the curlers in the bowl covered with napkins did it this time. But I do know it is frustrating to no end as you are going through the daily chore of keeping her (and you) safe and sound. \r\n\r\nI could have choked my mother-in-law on a couple occasions, (when she could still speak and driving). Some of the things I laugh about now... especially when she paid for and drug home P's chair that we donated to the church rummage sale in an attempt to de-clutter the house. She also bought me headboard that I told her I didn't want!