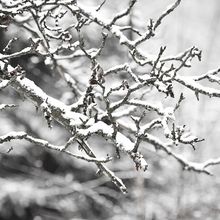 Monday night.  Jazz from KNKX in my earbuds.  The dog slurping water from her dish.  Carol quietly and peacefully asleep, which is both welcome and a bit unusual.


Spent the day in the house with the electric heater trying to provide a little warmth against the cold aftermath of the blizzard that roared through last night and into the morning.  Looking out of the kitchen window while getting breakfast ready, I was pleased to see my driveway already cleared.  I had no plans to go anywhere during the day, but it is always good to know I can get out if I need to.


I received several congratulatory responses to both my column published yesterday as well as my announcement concerning my short story publication.  It’s hard to quantify such occurrences, but I would say there was a definite uptick, including hearing from friends and family I had not been in contact with in some time.


All well and good.


But in spite of that attention directed toward my writing, or perhaps because of it, I spent some time trying to make good on my intention to find a publisher for Carol’s story collection.  A Google search brought up a list of possibilities broken down into three categories: big house, academic, and independent.


I don’t think it useful to spend time checking out big houses since I am reasonably sure they would require to be approached through an agent, which at this point I do not have. I will take a look and hope to be pleasantly surprised.


I scanned the independents and found three whose names are familiar to me.  A couple that looked promising will open for submissions on March 1st.  Among those supported by universities, a number seem to want work to be submitted to a contest.  Interestingly, I never liked that approach for my own work, but Carol, on the other hand, not only did but won recognition in doing so.  I guess I should pursue that approach both because it is hard to avoid and maybe some of Carol’s good vibrations will work again. These contests all charge a reading fee. I just don’t like the idea of paying somebody to read my work.  I suppose part of me, driven by my not inconsiderable ego, believes it is their privilege to be given the opportunity to read what I have written. The same holds for Carol's excellent work.


I do recognize these publishers, even with university support, could use the money to offset costs, and perhaps as well need to limit the number of submissions to those serious enough to pay a few bucks.  I don’t recall Carol paying such fees years back, but maybe she did,


In short, very few writers and/or publishers make much money from short story collections.  The fees, from that perspective, make a certain amount of sense.


Friday is March 1st, and I will send out at least one submission.


Tuesday night after midnight.  The forecast is for three to five more inches of snow arriving by late tomorrow afternoon.


My recollection is that Wednesday’s weather has been bad more often than not.  Fortunately, I don’t have to go anywhere on Wednesdays although Hanna makes her weekly nurse visit on that day.  This week, though, Hanna is in Hawaii, and I do not know if someone is scheduled to come out in her stead.  I suppose I’ll find out in the morning.


At the butcher shop today, I bought a pork tenderloin and a small roast. Both anticipate a dinner with Ryan.  Last night, I cooked up a pork tenderloin with his assistance.  I had intended to make it for Carol and me, but saw that it was big enough for the three of us.


Which it was.  Just barely.


Carol seemed to enjoy the meal, as did Ryan and I.  That success encouraged me to plan on a repeat, and as long as I was in that frame of mind, I bought the roast for another time.


I never claimed to enjoy cooking, but the takeout possibilities here are not particularly appetizing.  The Chinese takeout is closed on Mondays for the winter, and there are just so many mediocre pizzas I feel like eating.


So, I’ll do a little cooking for our Monday night dinners.


Shopping day tomorrow.  I should get some sleep.


Wednesday night, quite cold, but no wind or falling snow.  Portable electric heater doing its best to provide a little warmth.


Spent way too much time watching the Michael Cohen hearing today, but I am a news junkie.  Cleansed my viewing palate a bit tonight by watching a good hockey game even though my team, the Rangers, lost.


This morning, I stood by Carol’s bed and pulled up the blinds and looked out at a light snow shower.  Nothing too serious but still most unwelcome.


She laughed. Which raises the question as to what amused her


Perhaps it was the expletive.


The first is more interesting and requires a bit of context.


I’ll begin by saying I am bilingual in this way: I can do the Brooklyn street argot of my youth or that of the English professor, complete with doctorate, of my adult life, and pretty much anything in between, depending upon my mood and circumstance.  In the Brooklyn of my youth becoming comfortable cursing was a rite of passage.  I can’t explain why that was so in my circle.  In truth, I never heard my parents or other adults in the neighborhood utter even a mild profanity.  They were probably aware that profanity was associated with the lower classes with whom they did not want to be identified. As for us, their children, maybe that class sensitivity was the reason we cursed, to differentiate ourselves from our staid, striving parents.  After all, these were what the poet Robert Lowell called "the tranquilized Fifties" that soon gave way to the raucous 60s. In the middle of that tranquilized decade, Allen Ginsburg published his profanity laced "Howl," which is a literary version of what we were doing on street corners at night, offering a middle finger reprimand to all that social climbing niceness.


Be that as it may, profanity became a natural part of my linguistic tool box, available for humor or anger.  I recall our daughter saying she learned curse words from me when we were stuck in an interminable traffic jam on the Merritt Parkway approaching New York from Connecticut.


Coming from a very different background, Carol did not curse much, if at all.  In searching my memory as I sit here writing, I cannot bring up a specific memory of her using profanity although I believe she did on rare occasions.  I just can’t be sure.  What is true is that I am keenly aware, after seventeen years living on Old Mission Peninsula, that if folks here curse they must do it outside of my hearing.


Carol never expressed any unhappiness with my every once in a while cursing.  Maybe she just thought that was the Brooklyn part of me coming out.  She had loved living in Brooklyn, the energy and the expressiveness of its people as contrasted to the reserve of those she had grown up among. She told me many times that she enjoyed and respected that expressiveness.


So maybe that was what she was responding to this morning.  I hadn’t used the f word in anger although perhaps a little bit in frustration.  It was just a modifier, an intensifier.  To have just said, “Carol, it’s snowing ”again would have been inadequate.  It wasn’t just snowing yet again.  It was f***ing snowing again.


There is a difference.  And I suspect that is what Carol was responding to. I want that to be the case. I think it shows that from time to time, perhaps more often than I am aware, she is in the moment with me.


And I treasure those moments, not so much for her sake.


But for mine. And getting her book published, if I can manage it, holding it in my hand, will in a much larger way serve as a physical manifestation of all the moments I want to remember of our lives together.