Highly Agitated Yet No Medical Issue - Great, Now What?

Highly Agitated Yet No Medical Issue - Great, Now What?

CatKBorn
So last night started a dance of getting ready to go to her Optimists Club meeting -- which is on Wednesday - because she thought the meeting was today (Tuesday). I tried to show her the calendar, confirm that it was Monday. Okay, success there since she kept shoving the TV listings in my face for Monday demanding channel changing - which is usual. Issue was not that Monday was Monday or that Tuesday was Tuesday but rather that the meeting suddenly was -- after 20+ years of going meetings on Wednesday -- on Tuesday. Oh there was screaming "No!", slamming doors to go to bed at 9:00 instead of her normal 10:30 to pout, calling me a liar, and assorted drama. Some of which on my end because honestly, I lost it.

So today I stayed home with a stress headache and the master plan of sleeping all day for my mental health. Forget that news.

Around 9:00 a.m. she'd not made it to the bathroom in time and there was poop everywhere and I mean everywhere in the bathroom, including all over her. She had tried to clean it with her bare hands and of course smeared everywhere. So I'm up out of bed getting her in the shower and disinfecting the bathroom. After that, I went back to bed.

By 11:30 her ride had not come -- of course not, the meeting is Wednesday -- and she was extremely agitated. Would not believe me, would not settled down, would not let me go back to sleep. So I got dressed stuck her butt in the car and drove her to the meeting location at the Civic Center. Drove down there and as I'm turning the corner from Market St onto Main St she's releasing her seatbelt and making to open the door (yup, gonna engage the child safety locks -- if I have them). Get the car parked, prevent her from dashing into traffic and go inside. Sure enough the meeting room was locked. BUT there was a convention in the main hall and she decided THAT was where she was supposed to be.

I had to physically remove her from the building, force her to sit down. She wouldn't calm down. I called the doctor (family doc), they said get to the ER. I figure okay, has to be a UTI, it always is according to my online support groups, so off we went.

SIX HOURS LATER -- medically she's fine. Nothing on the CT (doc wanted to check for stroke), chest x-ray (couldn't get a clear sound check as she doesn't understand the whole "take a deep breath" thing, blood work was good (including electrolytes, a surprise) and the urine sample (after needing a catheter and ativan to calm down so this could happen to gather it -- thank God for ativan) was also clear for a UTI.

So, nothing medical is wrong. Therefore the doc can't admit her he says, not even for observation, has "nothing to hang his hat on" but he's concerned about her being alone during the day. No freaking kidding. Welcome to my world sir.

So they send in the social worker. We chat. I tell her everything I am currently doing and what started today's eruption -- which again erupts when I mention that the meeting isn't actually today. She (social worker) goes off to see what other areas resources she can come up with. She came up with NOTHING. Seems I'm doing everything she normally suggests people do. The doc suggests making a pros/cons list for a nursing home. I promised to discuss it with the neurologist in September. ARRRRGH!

So we're sent home with instructions to call the family doc and, get this, consider respite care for me.

I spoke to Home Instead Senior Care and we're moving the Tuesday to Monday. You see, I have a theory - the reason she sent the caregiver home half an hour early last week was that she expected her ride to the meeting at 11:30 (half an hour after the caregiver's arrival). It would also explain why during the first in home consultation she was so concerned about making her meeting even though, again, the meeting is WEDNESDAY for cryin' out loud.

I called the Council on Aging (not to be confused with the Area Agency on Aging) about their day care services. Sent me a pamphlet.... telling me to call for more information. Again: ARRRRRRGHHHH!!!

So everyone in the ER agrees with my master plan - in home help plus day care. But...

The last few days have been a marked departure in behavior. I was really hoping we'd find a UTI to explain the situation - we can fix that after all. But instead I think we are looking at another sudden slide in symptoms. So, now what? 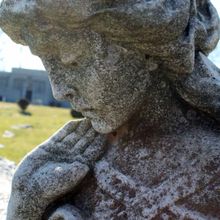 Her sorrow echoes how I feel.