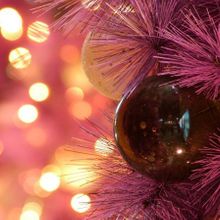 I never thought it would be this hard. Holidays, I mean. Mom died in early October, none of us are anywhere near normal, much less "getting over it". For myself, I seriously wonder if I ever will be.

Thanksgiving was pizza and wings from the best pizza place in town. (Vinnie's New York, if you're wondering. They're awesome.) Dad contributed a bottle of chianti and dessert. When he said the grace, he voice faltered and died away. I opened my eyes, looked at him (his eyes were open and bewildered) and I said, "Amen". He gave me a look of gratitude, and we tucked in. God, it was hard.

I had promised that for Christmas, I'd put more effort into it. Grandma gave me some $ to spend on our dinner (even though she doesn't do Christmas, it's against her religion). I got us a rare treat, a prime rib roast. I've only cooked that once before. I hope I don't screw it up. And this time, I'll break out the prewar Noritake china, and the sterling flatware. Yep, the whole nine yards.

I know these past two months have been very hard on my dad. Yesterday was my birthday, and he neither called nor dropped by. That alone is evidence enough of how he must be struggling. No, I'm not mad or offended. I'm sorrowing for him, for me, for my brother.  For the terrible loss of her, and the even more terrible knowledge of how none of this turned out the way it was supposed to.  She suffered so damn much. And we had to witness it. It is burned in my heart forever.

I know in my heart that my mother is in Heaven, that I will one day be reunited with her, and on that blessed day all the wrongs between us will be made right. World without end, amen.

But no matter how hard I try to make this Christmas "normal" for us, the living, it won't be.  Maybe a new "normal" is in order?

Wishing you all a peaceful, blessed Christmas.

Desiree, it sounds like you have the gift of hospitality. You made it a beautiful Christmas for your family in spite of tough feelings.\r\n\r\nMy mother died suddenly five years ago in a very shocking way. I remember that first year of holidays being in deep grief and supporting my dad through it. Grief is hard work for everyone. Our bodies need a lot of time to process the complex and profound feelings. It's most strenuous for the spouse left on this earth. I thought my dad would not survive it for long.\r\n\r\nTo this day, five years later at 91 y.o., my father remains in general depression. But after a couple years following her death he began to really be able to focus on the immense gratitude he feels for having had my mom in his life as long as he did and with such a full, happy life together. Now he cries tears of incredible gratitude. He's an inspiration to me and my four sisters.\r\n\r\nWe have to do the hard work of grief and mourning to move through it. It cannot be rushed and it is a different process for everyone. There's no one right way to do it. It's just darn exhausting at times; another kind of roller coaster with a mind of it's own. Our bodies know, whether our minds do or not. We move in and out of it because no one can stay in its painfulness non-stop. It has to come out or it will fester in negative ways.\r\n\r\nIn my opinion, you can rest assured, any \"wrongs\" between you and your mother are already moot. Aren't we all in the same boat? Aren't we all doing the best we can at any given time with the tools we know? If we had the where-with-all to do better, we'd do it. We are human, There's no getting around it. We all make mistakes. And we all can extend Grace to ourselves and to others. Always, there is Grace. Always, we are surrounded by loving kindness. Your mother is in the realm of the sacred divine where all is well. Though we still live in this earthly world with all it's joys and sorrows, we too, are steeped in loving kindness at all times. We are all on the same journey, learning to grieve well. Hugs and comfort to you and yours....

First, Happy Belated Birthday to you, my friend.\r\n\r\nSo much happened this year--I can only imagine how much your heart is still spinning. The trauma of caregiving makes the heartache worse.\r\n\r\nI hope your thoughtful touches on Christmas brought your mom closer to you. Please let us know how you did when you can.

Thank you, Desiree, for sharing these difficult feelings with us here. I respect you for listening to your heart in this deep way. You are in my thoughts today.