"Honey, Have You Seen my Cell Phone?"

"Honey, Have You Seen my Cell Phone?" 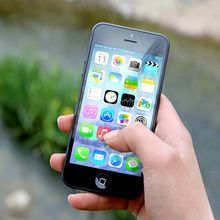 “Honey, have you seen my cell phone?” If I had a dime for every time I have said that over the past 10 years, I’d be a rich woman! My mother passed away in April 2014. My father passed away this year, 2 years and 4 days after her. I think it took me over two weeks to realize that I did not have to carry my cell phone with everywhere, including when I went to take a shower!

I am thankful that I had a cell phone while I was assisting my parents to age-in-place. We averted quite a few emergencies by me answering my cell phone and either talking my dad through something, or driving to their house to help him figure out what might be wrong with my mother. I was able to drop everything at a moment’s notice for most of those 10 years, and I was glad to do so.

However, I do miss hearing that special ring tone that I put on my phone for my parent’s phone number. Sometimes it was just my mom, who had Alzheimer’s, just calling to say hello, or to tell me about a show that my Dad had pointed out to her that would be on in the evening. My mom and I shared an interest in the ocean and marine mammals and sometimes I would receive two or three calls in a day reminding me to watch “that show about whales.”

I still haven’t taken their phone number off my phone. I don’t think I ever will.

Following my mother’s death, I was worried about my father. He had devoted over seven years to taking care of her. He gave up attending functions that he had attended in the past. He gave up volunteer work that he had done. I helped as often as I could, but he frequently turned down my offers of help. I was worried that he would just shut himself up in the house and mourn. However, as those of us who have lost a caree can attest to, there is often a sense of relief at their passing, as much as we may not want to say it aloud.

My dad flourished! He began to attend meetings and dinners again. He also spent hours on his computer, corresponding with people that he had not had the time to corresponding while he was caring for my mom. My dad loved the computer. He would often email me three or four times a day, any time he thought of something he wanted to tell me. He did the same thing with my siblings, who live out of town. My brother had gotten in the habit of sending my mother a daily morning email with a brief overview of what had been happening in his life in the past twenty-four hours. Sometimes he even included a photo or two. He continued to do this even after my mother passed away. I think my Dad looked forward to any email he received that wasn’t spam!

So, while I often curse having a cell phone and a computer, I am glad -- for my parent’s sake -- that we had them when we needed them.

So true! I know this feeling so well too. When caring for my mom, my phone was always right on me when I wasn't with her... always ready for an emergency call.