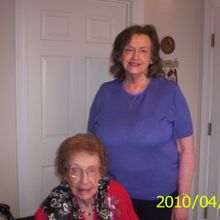 Today is the anniversary of Mother's passing five years ago. Being her full-time caregiver for five years was not always easy but one which I would do again. It is true for me that the difficult and emotionally-wrought times fade into the background and good memories rise to the surface. Mother was 82 when she fell and broke her legs and needed much care. Since I had always promised to keep her at home, I did so. I would do it again!

It was during these last years that I learned more about Mother as an individual from her childhood to the young woman who married my father. She spoke of childhood dreams and fears which were not known to me. I think as children we don't often think about our parents in that vulnerable way of sharing intimate thoughts and feelings. The memory of these caregiving years are precious to me as they linked us in a bond which death did not break.

Today I remember Mother with love and admiration for being a strong woman who endured hardships growing up during the Depression, who raised three children, and who was married to her husband until his death. In illness, she endured pain and suffering with the faith "that her God would never leave nor forsake her." That is a vision I have of her today--her hand raised high in the air and declaring those words. I am happy that I could honor her wishes of caring for her at home.

Thank you for sharing your thoughts with us, Bonita. Both my mother and my mother-in-law passed away last summer, one month apart. I regret I didn't get to learn more about my mom in later years because Alzheimer's took her memories way too soon. \n\nI too found the bad memories and struggles of caregiving, and especially watching them struggling to breath in the end, have all faded. Those have been replaces with kinder, good memories.

Thank you for your post, Bonita. My mother passed a few years ago. She would never speak about her childhood or her early adult years meeting and marrying my father. I always wondered about the side of her she never shared. I love that you got to know that side of your mother.

Thanks for sharing that post, Bonita. It is a wonderful reminder of the complexity of the human experience, when even our own children don't know what we have gone through unless we share it with them. How great to hear your mother shared this with you and you were very present to receive it.

beautiful! thank you for sharing!