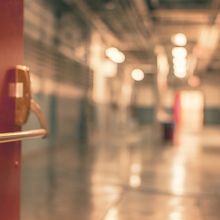 Well, we are home from the hospital.

I called the paramedics to come and take Mom to the hospital Thursday evening and I followed behind in the car.  I had packed the car with everything we would need for several weeks in town, just in case.  The ER was BUSY but they got to Mom quickly.  They let me back in the room quicker than normal so I was able to speak to the nurses and for the most part they were very gentle with Mom.

Then the doctor came in--he was a different story.  He was NOT gentle or kind with Mom and was very rude with me (amazingly that is quite normal!).  He didn’t think Mom had pancreatitis but ordered blood work and a CT scan.  Very quickly we found out that she has yet another kidney stone and this one was obstructing output.  Since she only has one kidney and it is already diseased, this is a potentially dangerous situation.

He immediately called around to the hospitals in Las Vegas to get her transferred ASAP.  After over an hour he was able to find a hospital that would take her.  After being assured that it would be several hours before transport would arrive, I ran some last minute errands that needed to be completed before we went to Vegas, well the errands that can be run at 3 a.m!  I raced back to the hospital only to sit there until 7:30am when her transport arrived.

We waited over 10 hours for the ambulance to take her. I could have transported her there myself almost five times (I did ask the doctor if he would allow me to just take her, he said NO WAY)!  Finally they packed Mom up and I told them I was going to follow them as I had never been to that particular hospital before.  We started out and immediately I was SO thankful that I had printed out directions to the hospital just in case because this ambulance driver was a lead foot!  He averaged 15-20mph OVER the speed limit.  I was NOT going to break the law and sin just to keep up with him.  He was driving quite recklessly and I continually prayed that he would slow down and stay on the road and not get into an accident. Later Mom confirmed that she was also praying that same prayer!  He was tired and had been up all night driving.

I arrived about 15 minutes after they did and I finally got into the ER and to Mom’s room.  She was not doing well.  The ER was extremely hectic and everyone was running around.  I tried to calm Mom down and see to her needs.  Mom’s nerves were beyond raw and all of the noise was throwing her into tremors.  We were there for HOURS and all that constant noise was sheer agony for her.  Finally I talked the nurse into giving her something to help calm her nerves and put her to sleep.  It worked and Mom was finally able to rest a bit.

Her blood pressure was VERY high and her oxygen levels were VERY low.  Finally I was able to talk the nurse into putting us into the quietest spot in the ER while we waited to get into a room.  About an hour after they moved us to a quiet spot, a doctor walked in and said that they needed to prep Mom for surgery!  I was taken aback because I thought we were here to pass a kidney stone, not do surgery!  He tried to be patient as he talked with us and I asked him a million questions--he probably thought we were insane.  Doing surgery on an RSD patient is quite risky as it can cause the disease to progress rapidly and flare up.  He left us for a few minutes to talk things over.

We prayed and discussed it a bit and decided that we should do the surgery to save her kidney.  They wanted to do it quickly as it had already been possibly about a month of it being blocked and the kidney was showing signs of  stress.  They rearranged the surgery suites and got us in in a matter of 30 minutes.  It was all very rushed and they took us up to surgery to meet the anesthesiologist.  I expressed my deep concerns about surgery and RSD.  Thankfully he knew about RSD and had dealt with patients with it before.  We decided on a certain course and then they were off!

I waited in the waiting room for the surgery to be completed.  I was able to chat with several different people while I waited.  Finally the doctor came out and said the surgery was a success. He had placed a ureteric stent into her kidney to drain off the excess into her bladder while we wait for the stone to pass.  Once she is able to pass the stone, we have to go back and they will remove the stent (two weeks to six months).  He said she was in recovery and I could meet her in her room in about an hour.  I beat her to her room and was able to welcome her there.

She was NOT doing well at all.  So not only are we dealing with detox (so we have to be careful with pain meds), she has R.S.D., she has a kidney stone, and has just had surgery.  To say she was in excruciating pain is putting it mildly.  We didn't want to go crazy on the pain meds as we didn't want to go backwards with the detox.  The doctors, nurses, and staff were very understanding about the detox and saving her liver and kidney and so were willing to work with us concerning pain management.

A new doctor came in to see how she was doing a few hours after surgery.  He and I stepped outside to talk.  He explained that this is normally an outpatient procedure and that he wanted to discharge her; I almost cried!  It had been over 40 hours since I had slept or even laid down at this point and I was beyond exhausted.  There was NO WAY I was going to be able to drive us 1 1/2 hours home, in the middle of the night and be able to care for Mom who was vomiting violently, still actively bleeding from surgery, unable to even roll part way over in bed, moaning in agony, etc etc.

I know my limits and I, at this point, was not able to care for her properly.  I told the doctor that I couldn't do it all by myself and I begged him to allow her to stay at the hospital.  He had great pity on me and admitted her.  So began the worst night for Mom.  Thankfully the Lord granted us great strength and stamina and saw us both through.   It is only by God's grace and the prayers of all of our friends and family across the globe that saw us through.  The next day we decided to reassess our stance on detox.

Being at 10 out of 10 pain doesn't promote healing, and so, through prayer and discussion we decided to put detox on hold and try to control her pain first, and then once all this is over with, we will continue with the detox.  We asked the doctor what he thought and he wholeheartedly agreed with this decision.  He then said that since her vomiting had stopped (even though she was still dry heaving), he had to discharge her.  I was very dismayed.  I had hoped that Mom could stay one more night.

She was SO very weak and the though of having to drive down bumpy roads all the way home, not even 24 hours after surgery, was not a pleasant one.  The nurse came in and expressed how sorry she was that we were discharged.  She knew Mom needed at least one more night to recover. The decision was not in her hands.  She begged us to not be mad at her.  We told her we knew it wasn't up to her or even the doctor.  There are standards of procedure and we had been shown great grace in being allowed to stay one night.  It took us a LONG time but we got Mom dressed and ready to go.

Thankfully the nurse took her sweet time in getting the paperwork together so we ended up with several more hours for Mom to rest.  The nurses hugged me as we left.  They just fell in love with Mom even during this short time.  The ride home was excruciating but Mom didn't pass out or vomit which was a blessing.  We got her all settled in her bed and she is slowly healing.  We are not able to get her prescriptions this weekend, so tomorrow morning I will take them to the clinic and see if the VA will fill them.  She needs the antibiotics and what not. I am praying they will fill them without hesitation.

We have decided to only fill one of the two pain medications and will only use it if she absolutely needs it.  We ask for prayer for great wisdom and endurance.  Thanks for being here for me.  I have a safe place to vent and get and give encouragement.  Blessings to you all!

<a href='http://www.caregiving.com/members/lilmagill/' rel=\"nofollow\"><a href='http://www.caregiving.com/members/lilmagill/' rel=\"nofollow\">@lilmagill</a></a> - Thank you. The reason we were detoxing her off all of her meds is her liver was heading into complete failure...the Dr thinks it is due to the meds, so in order to save her liver, we need to get her off all of her pain meds and see if the liver will heal. Also, when one is on opiates for a long time, they can actually cause you to hurt more, so the hope is once she is off all pain meds, her brain will start to create natural pain killer again (the meds have stopped that process) and maybe instead of living at an 8-10 out of 10 pain level, maybe she will be at a 7 out of 10. We just don't know as we have never done this before. Time will tell.

Thank you for the prayers! We have been living off of them! I haven't seen any improvement on Mom as of yet, but it is still early.

I hope you didn't have any trouble getting the scrips filled. That's the last thing you need on top of this saga. I was exhausted just reading it. You and your mom are more than overdue for some R&amp;R!

I am astounded that with everything else going on you can find the time to blog about your experience. It sounds incredible, but shows how strong and courageous you both are. I hope every passing day brings comfort and healing to your mom, and some rest for you.

I'm so sorry for all you and your mother are going through. I'm glad you were met with some kindness and sympathy. What is the purpose of taking your mom off all of her medication? Is it going to help her control the pain better in the long run?