Hospitalized for the Third Time

Hospitalized for the Third Time

Meryl
Mom called at 3:30 Monday morning frantic that she couldn't breathe. As always I try to calm her down because I know she will get worse if I don't. I am the only one who can get through to her. I was upset that the nursing home did not call me to tell me that they were taking her to the hospital but they told me they were waiting to finalize everything before they did. Mom also said that she couldn't breathe well Friday night and they had to give her a nebulizer treatment. She said she wanted to go to the hospital but the nursing home didn't feel that she should. Mom was just released Friday from the hospital. I am having a hard time with all of this happening in such a short period of time.

Mom was brought in as "respiratory distress". Her oxygen level was low and they rushed blood work and found that her white cell count was elevated. Mom was put on this different oxygen mask which I forgot what they call it but it wasn't a regular one. It was basically for someone who had severe breathing problems.

While there moms blood pressure was over 200. They started giving her so much blood pressure medication but it wouldn't go down. At one point her blood pressure was 248/105. I started to get nervous that something was going to happen because I remember she had a seizure a few years back when her pressure reached 260.

Mom's veins are very small. The doctors have problems taking blood and her whole right arm is all black and blue from all the poking and prodding. They can't take it out of the left arm because she has the dialysis shunt (which doesn't work and they aren't allowed to take blood from there). I felt so bad when they had to take blood from the artery, not the vein.

She was in so much pain that I wanted to cry but I had to be strong. I told Mom that she should squeeze my hand hard if she needed to. She looked terrible and with the lack of oxygen at one point she looked like she wasn't going to make it. They had hooked her up to another machine and that machine at one point said "no breath" and went to 0 and I started to freak out.

The doctors said that Mom had fluid building up in her chest. She was wheezing so bad and progressively it got worse every time she breathed. Between that and the blood pressure being high they felt dialysis would be the answer to draining the fluid. Apparently it did help as she looked so much better.

Drknowitall said that Mom has pneumonia in both lungs. I still don't like him but until I can get another doctor at least in the hospital, I will keep her under his care because she does need a doctor to look in on her and I don't know who else to take. The nurse manager in the hospital said that he was going to be in the emergency room yesterday while we were there and I explained to her my concerns and that I did not like him and wanted to switch. I definitely have to look into it.

I stayed in the hospital with mom for 16 hours yesterday. I was afraid to leave for fear that something was going to happen.

My brother came by yesterday morning before he went to work and started with his "controlling ways" again. I went to get a doctor to tell him exactly what I did so that he would see what was going on. It's hard enough having to deal with all this and then have to deal with him. When he left he asked me to call him with an update. Reluctantly I did and when I told him about her wheezing he asked me if that was my diagnosis or the doctors. I said, Are you calling me a liar? I said why don't you sit here for 16 hours and listen to how she is instead of telling everyone else what to do. I said you sit there and do nothing. Honestly I am tired of this and I can't deal with it anymore. I don't need the aggravation and let him call or go there so he can get the info himself.

Tonight I decided to stay home and take care of me. After yesterday I couldn't move. I was sore all over from the whole day.  I knew she was doing better today and if something was wrong I would have run there but I couldn't even function.

All this running back and forth for three weeks in a row is taking it's toll on me. I felt guilty not going tonight but I just couldn't do it.

This picture was taken Sunday when Mom looked like herself. She looked absolutely beautiful. I have no clue where all this came from. 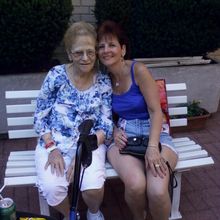