How Big is Your Footprint?

How Big is Your Footprint? 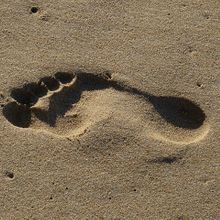 Take a look around your living space.  What if you were to die tomorrow? How much “stuff” would you leave for your loved ones to take care of? I have a friend who calls this a “footprint.” I think that is a perfect word to describe what we leave for our families to deal with upon our death.

My father passed away in April, two years following the death of my mother. Until his stroke in December 2015, he had said almost daily to me, “Geez, I’ve really got to start going through all of this stuff around here. Otherwise, it will be left for you kids to do.” We had many laughs about that because of the amount of “stuff” in his house. My father had owned his own engineering business for 25 years, and then decided that his true passion was teaching and he became a full-time professor at one of our local colleges. He never threw anything away. This was before the age of computers, where it is possible to find any of the information you need to find.

His basement is full of old engineering books and magazines, teaching plans, tests, papers written by students, maps and plans, and copies of anything else that he found to be interesting or useful in his teaching career.

There are also many mementos belonging to my mother. She was a wildlife photographer and traveled around the world. These items held special meaning and were important to her.

In going through my parent’s basement, I have found how difficult it is to make a decision about keeping an item, donating it, or selling it at a garage sale. I cannot keep everything I find. I have reservations about donating some items, and selling some things at a garage sale just doesn’t seem right.

I wish that I knew what was in my parent’s basement before now. Although my mother had dementia and her short-term memory was very poor, her long-term memory was mostly intact. We could have had some good conversations about the wooden animals she collected, or the rocks, stones and shells (that she had meticulously labeled) from various beaches and other places she visited. We might have been able to discuss where she would like these items to go upon her death. Now I have to figure it out on my own.

Where would my father like his old engineering books to go? In general, I have a difficult time throwing any book away. I think books should be shared. However, many of his books are 50 years old. Who would want those? The engineering students in school these days are learning everything from computers or books written 6 months ago! On the other hand, the theories behind engineering do not change that often, and some of these books could be a goldmine for someone. When my father used to tell me that it would “be up to you kids someday,” I should have asked him, right then and there, what he would want me to do with his things. Now I have to guess.

Reducing my parent’s footprints has not been an easy task for me. My husband and I have been attempting to accomplish this task as carefully and lovingly as possible. Most everything I have touched has a memory attached to it: the sewing pattern my mother used to make my first miniskirt, the yarn she used to make me a vest, the paperweights I made for my parents when I was 10 years old, Christmas ornaments, my father’s slide rule that he used at the kitchen table while working in the evenings. If I could dedicate a room and turn it into a museum, I would!

However, at this stage in my life, and my sibling’s lives, we are trying to downsize. We don’t need more stuff. We’re attempting to get rid of our own belongings. I now find myself being more cognizant of the footprint that I will leave for my own children.

My parents were both very accomplished in their own right. I am proud to follow in their footsteps, but I do not want to get lost in their footprints!