How Do You Say Goodbye?

How Do You Say Goodbye? 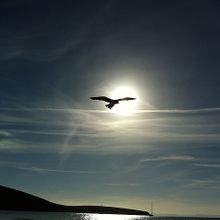 But for family caregivers it's not always the easiest.

Last week on February 1st, my sweet Daddy passed away due to complications of pneumonia. We knew he wasn't feeling his best, and he had a cough that he couldn't shake but he was still getting up every day, enjoying his daily routine and eating his favorite foods. Also, he had no sign of fever or any "feeling bad" symptoms.

On Sunday we had our usual routine, him playing armchair quarterback -- he was especially interested in the Carolina Panthers this season. We even ordered Domino's that night and he had one of his favorites -- their hot wings. lol

Never did I dream the next day when I woke up things would be so different. I went to check on him when I got up and he was definitely not feeling well. He said he was "hot" but he wasn't feverish at all. In fact, he was clammy and soaked in sweat. Not good. He was talking and alert though but said he didn't feel well. I got my daughter to check him out and she said we needed to go ahead and call 911 and take him to the ER.

He was fine with that -- big red flag. He hates the ER. EMS came and of course the next step was to transport him to the hospital which he had no problem with. Another big red flag.

Once he was there, he was diagnosed with double pneumonia. They administered oxygen, breathing treatments, fluids and IV antibiotics. My pastor came quickly, and had a good conversation and prayer with Dad. In explaining his diagnosis, one of the doctors said they could transport him to a larger hospital where they could do more extensive tests but he may not survive the trip. I told her that Dad wouldn't want that, he was almost 90, had a living will and was DNR. She said she understood completely, and the plan was for them to keep him in ICU for a few days and then move him to hospice house because he was so sick.

My mind is racing at this point. Did I do everything I could? Should I change anything? They came to take him to x-ray and said he would be back in a few minutes. They didn't get him to x-ray before he started having breathing complications so they brought him back to trauma. Within 10 minutes at the most, Dad was gone. My heart was breaking as I held his hand and told him everything would be okay.

How do you say goodbye to someone who has loved you unconditionally from the first time they saw you? Who stepped in and fought your battles when your confidence was shaken? Who set the examples of faith and strength in your family that would carry through to grandchildren? Believe me this isn't easy.

Dad was my first love. I have so many wonderful memories of him. How do you say goodbye to all of this? Well, it's very difficult but you can.

With the love I had for Dad, the example he set in my life and the faith I have in God. I am beginning to move forward. He is now with my mom, reunited with the love of his life in Heaven, along with his baby son he wasn't able to hold. Images like that are what keep me going right now. My circle of friends, both personally and in social media, have been so supportive. It's been truly amazing. My church family is awesome, so kind and caring. These are things that will keep me going. My daughter's resilience, supporting me and being my friend as well as my daughter keeps me going. And our sweet kitty, Coco. Bless her heart. She misses Daddy! She looked and looked for him last week, and she has become our "therapy cat" so to speak. Keeping me company in the evenings while I don't feel alone.

I want to thank all of my friends at Caregiving.com for the support, concern, emails, HUGS, and prayers during this time. I'll still be around, I just have to find my center. That's my goal for right now.

Love to you all.