L
(Editor's Note: We welcome L, who cares for her parents, to our blogging team today. Be sure to connect with her on her profile page: @andimfat.)

As anyone that has had to take care of an elderly dementia patient knows, routines are sanity. They provide a clear schedule, something familiar and "safe" to a dementia patient. Breaking from routine is bad, even for an unfamiliar or new doctor's appointment.

Imagine having a break that involved packing essential items into a vehicle and traveling 3 hours away from home and all that is familiar and having to spend three days in this unfamiliar location.

Hurricane Matthew swept through my hometown in the early morning hours of October 8th, 2016. Mandatory evacuation for our area of the mainland happened on the 6th, just 2 days before. We packed up, almost all of us. My parents and myself, my oldest niece and her boyfriend and 3 year old son, my youngest niece and her boyfriend, and their cousin, plus 5 cats and a dog.

We got lucky. Not just our family but the whole town of Brunswick, Ga. As of the time of writing this, there have been no deaths in Glynn County from the hurricane. Lots of trees down, some damage to houses and buildings (the entire side of Arby's fell off!). 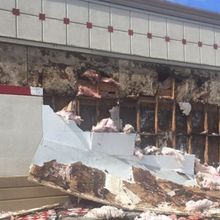 But this was a break in routine. And not just a little break, like a ride across town or to an unfamiliar doctor. This was eight adults, a 3 year old, five cats and a dog in three hotel rooms in a town three hours away. To say that mom didn't take it well is a vast understatement.

Her mobility wasn't great before. She's had two TIA's (mini-strokes), and has diabetic neuropathy. Oh, and she's blind. She could walk with assistance (you had to keep a hand on her to keep her from going over backwards) but as of last night, she can't stand up under her own power. She tried to make it to the bathroom (bedside commode) with me and my niece helping, and fell, landing on her foot. No broken bones, but an abject refusal to go to the ER or clinic, and trying to make her was causing a lot of distress so we let her lay down and put an icepack on it. (Yes, we spoke to one of her doctors, this isn't that unusual for her. They believe it's most likely a slight sprain and should be ok in a couple of days)

She's more confused than normal as well, and had an absolute fit at me for not understanding what "two pins in the post" meant. She couldn't explain and I still have no clue. She also got fascinated with "Who is Michael Jordan?" this morning, she remembered he was famous but not who he actually was or why he was famous (she's not a "sports person" either). She got upset that Dad wasn't home around noon, and couldn't seem to understand he was in dialysis then. Add to that her blood sugar dropping to around 66 this morning (her "normal" fasting is around 115-120, that was very low for her), and she didn't have a great morning. I had to help feed her dinner, she had a lot of trouble working her fork (but was ok with the french fries). She asked for a pain pill (Tramadol) after eating, gave it to her with a cup of (lukewarm) coffee.

I'm checking on her every 30 minutes to an hour while I'm awake, and both she and dad have their phones if they need me at night.

If anyone out there is reading this, and going through anything similar: This is normal. We broke routine. We broke it in a spectacular way, and she's handled it better than I thought she would so far. She'll go back to her version of normal in a few days or so (most likely) and life will continue on as usual for us. I don't want to leave this on a depressing note though, so I'll add this.

This little guy is "King". He was living in the parking lot of the hotel we went to. My niece's cousin adopted him, and will take him next week for shots/neutering. You can't tell in the pictures, but his whiskers curl down at the ends, and his purr is so loud you can hear him across the room. He's adorable! We think he came out because he smelled the other cats (seriously, five cats in two hotel rooms. EVERYONE could smell the cats...) and he just sort of fit in with them. One of the hotel residents said they'd been taking care of him and had him tested but couldn't afford shots or neuter and was overjoyed when T said she'd take him. I'll probably post pictures of his "sisters" (or would it be adopted cousins? He was adopted by my brother's wife's niece, so whatever that comes out to) later. In the meantime, you can catch my posts about random things on my Twitter or my random pictures on IG!