Husband of the Year

Husband of the Year 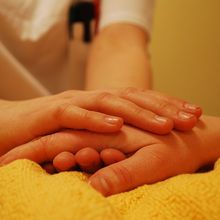 Although we've only begun the serious caregiving work ahead for my family, I have to acknowledge my husband, Michael. It's my biological parents who are sick and he's gone above and beyond to treat them like his parents (and maybe even better, considering Mike's relationship with his immediate family is ... strained, to put it lightly.)

My mother has been disabled for about 13 years and we've been caring, for the most part, at a distance though more recent visits within the last few years that turned into week long cleaning sprees made it clear to us that things were in decline. Yet, we were not completely worried, and thought that we could continue to care from New York and make occasional trips to North Carolina to support her. I continued working, Michael actually bought a business, and things were stable.

About a month after Michael bought the business, my dad was diagnosed with Glioblastoma. I'll never forget those first days, the panicked phone call from my dad, the countless hours under the hospital lights of NYU, but that's another post altogether. Even though it was scary, it also seemed stable. After my dad's surgery to remove the tumor, we scheduled treatments and he was able to take the bus and train to his appointments. In fact, my father wanted to travel by himself, perhaps to remain in control and independent in some areas of his life.

A little less than a year into the business, my mother was having serious neurological issues. When she had her scan, she says she already knew that the aneurysm in her brain--discovered when its twin hemorrhaged in 2001--had grown. We had actually known that it had grown a bit within the last two years, but the more recent scan showed that the aneurysm was larger than 5cm and, combined with the new symptoms, would need to be operated on.

We knew we would not be able to support a business in this situation. My husband was working 14 hour days, maybe longer, in a restaurant. In his own words, he could not be a good partner to either me or Adam (his business partner) and that was killing him. Michael sold the shares of his business and became a house husband--and I say that with all respect--while I continued working. Michael traveled to North Carolina to help my mom with neurological appointments and the consultation for her surgery at Duke University.

We both traveled to NC for the surgery--another collection of stories that can easily fill a different post!--and I was only able to stay out of work for about a month. It was clear that my mom would need additional help in follow-up, so Michael stayed in NC with her for an additional two weeks before returning to New York. He cooked, cleaned, took care of medication, did, for the lack of a better term, "man stuff" around her house like moving furniture and cleaning the garage, and of course provided companionship and comfort to her while she was recovering. When her surgeon and primary gave her the OK to drive, Michael returned to NY.

Upon our return, we realized that things with my dad had gotten bad in our absence. He was extremely exhausted all of the time, he was disoriented even in familiar places, and his memory loss was troubling. It was clear he could not continue to do medical appointments by himself, but he was resistant to support. His mother, my grandmother, who we refer to as "Nanny", came for a visit and after being with him for a few days, confirmed what we were hesitant to admit: He could no longer be alone, even in his own apartment.

On Father's Day of 2015 we started packing up my dad's apartment. Throughout the past week Michael (and some dear friends of ours who I cannot thank enough!) have moved everything out of his apartment into storage or into our apartment. Last night, after Michael took my dad to his infusion appointment, was the final pack-up. I stayed with Dad at my house, reminding him where he was, what day it was and trying to be reassuring, while Michael and friends lugged the last of the stuff around. We are trying to be mindful of giving each other breaks and tag teaming everything so no one gets overwhelmed (at least, not to the breaking point). In a month, we will all be in NC so that Michael and I can care for both Mom and Dad without all of the distance of the past.

At the end of the night, my father, even if he couldn't remember everything that had happened, was grateful to Mike and our friends for all of the help.

I hear my dad's voice when I type that and it brings me to tears every time. Michael is more that just my husband, he's completely part of the family, closer than some blood relatives, and his strength and perseverance is amazing. Throughout all of the craziness and seemingly endless cycle of bad news and life changes, I am so fortunate to have Michael by my side. I hope that the rest of the family caregivers out there have someone--a spouse, a sibling, a partner, a friend--who they can rely on the way that I can rely on Michael.

Thank you everyone! I'm an only child, so without Michael, I hardly have anyone to turn to. He's my rock and I love him! Thank you for all of your comments_mysql and I'm so happy to join this great community.

Hi Delia--I'm so enjoying your blog posts. :) It's great to get to you know you and your family better.\r\n\r\nYour husband is awesome! I love that he simply helps. Sometimes we can have help but it grumbles, resents, makes it feel like the most unhelpful help in the world. Help that really helps is an incredible blessing. \r\n\r\nAnd, your dad's words!! No better gift than that.

What a man! What a blessing! So happy you have a partner to go through this with! He sounds like a keeper Delia! Hold on to that guy! Thanks for sharing this wonderful post!

Delia,\r\nYour husband sounds like a gem! Mine was the same way when we were dealing with my Grandfather &amp; Aunt. I couldn't get through what I went through if I didn't have his support!\r\nMaria