I Don't Have Time for This

I Don't Have Time for This

CatKBorn
Mom has been at the care facility for just over two weeks now. She has good days and bad days, sometimes she eats others she refuses. Sometimes her tongue pushes things out or prevents food/drink from getting in other times it's not an issue.

Her new lift chair has a bad transformer so a part had to be ordered. $900 and it doesn't work out of the box.

Still waiting for the powers that be to agree to letting her cat Callie Kitty live with her before the other residents of the house get to vote on the matter -- so who the hell knows. Meanwhile they miss each other and Callie cries a lot.

Need to re-file for Medicaid as the Medicare coverage has stopped as of June 1st. Given what all I went through last time, this freaks me out a great deal.

AND NOW politics are messing with a friendship -- or rather the reconnecting of one. Let's just say we're polar opposites but instead of talking about the differences to better understand them, she wants a situation where we simply ignore each other's beliefs. I don't think I can do that as those beliefs are a HUGE part of who I am. But I do miss her. ARGH!!!

I don't have time for this. Or the energy.

What I DO have is a slow reclaiming of my house, and my life. Oh... and a new kitten: 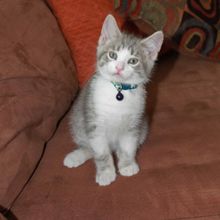 Great to hear you are reclaiming your house and life. Love your new buddy.