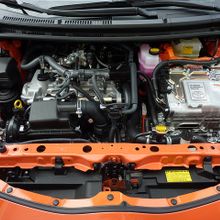 Mom and I had to travel into town for three doctor appointments.

We always have to spend the night as Mom is not strong enough to return on the same day. So yesterday we had two doctor appointments and BARELY made it through those (thankfully we will be getting her at-home oxygen which I am thrilled about).

We just made it to the hotel and she almost was so weak that she couldn't even stand to transfer to the bed. This morning I got us all packed up and ready to go our other doctor appointment, and I went to start the car to load Mom...and it is dead! It sounded like a battery problem, but I had just replaced the battery a few months before.

I had to hunt down security and FINALLY found someone after walking around for about 15 minutes in 110-degree heat. He came and tried to jump the car but it didn't work. I called the tow truck and they said it would be 1 1/2 hrs before they could come and get us. I went back into the office and begged to be able to be let back into the room so Mom could lay down and cool down. They gave us a 30 minutes. We were so thankful.

Finally the tow truck came and he said something messed with the security system and that is why it wasn't working. He tried a few tricks and he couldn't get it. So it took a lot to get Mom lifted into his massive truck (she fell once) and he towed us to the shop. She fell again getting out of his truck but thankfully he helped me get her down and she didn't fall on the asphalt. I tipped him well for his assistance.

The guy at the shop said whoever tried to jump the car didn't know what he was doing and he put the clamps on the opposite terminals and depolarized the battery and that blew the fuse to the whole vehicle.  He said it would be another three hours and I am not telling how much money to fix it. We didn't have a choice. We found an area for Mom to lay down and rest.

We obviously missed the doctor appointment today but thankfully after three hours the car was working and we drove the two hours home.  As soon as I got Mom into the house and I turned around she fell and went right out the door that I just closed.

Poor thing is so weak and in such agony! I am glad it is the weekend and we can just rest!