I Haven't Fallen Off the Face of the Earth

I Haven't Fallen Off the Face of the Earth

0
I feel sometimes that time just (somehow) gets beyond my reach. Where I feel it's only been a short time, I find (when I really focus and look) that it's been much, much longer. I also have not been posting here regularly because I found myself focusing on so many negatives. And living with a very negative person (my husband - one of my carees) I found I needed to really and truly work on being positive--if for nothing else--my own sanity.

But last night I hit a pretty new low and decided that maybe I need to get back here and even if no one reads my craziness, maybe just putting it down and out there, it might melt away or otherwise make a difference.

First, we've hit a bit of a financial issue. We had some unexpected major issues come up that needed to be taken care of immediately - like a sewer back-up for one. In a household that barely gets by in a month (I mean our budget is really tight but we were getting by without major issues), things like this create havoc. So when this first one happened, I had to borrow out of the mortgage payment and only made a half payment. After that, for several months I made regular payments. Then the washing machine went. It agitated, but stopped spinning and emptying. By this time I had been in contact with the mortgage department at our credit union to try a work out plan and get us back on track. We spent a few weeks bailing the washer and hang wringing clothes but it wasn't a good solution. So again, I made a half mortgage payment and went out and bought a "new-to-us" washer so we could at least have clean clothes.

Well, the company that services our mortgage didn't recognize either half payment (putting all of both towards escrow) and in late July we got letters threatening foreclosure. Again, I've been working directly with the mortgage department at the credit union who have been being intermediary with the servicing company. They tell her "a few days" to straighten things out that have turned into two months. She is good and trying to help us (from all appearances) and I'm keeping everything in writing. But it's stressful. I made the mistake the other day of trying to explain all this to my husband and all he heard was so much money behind (that the servicer was claiming) and foreclosure and he's freaking out.

Obviously, I can't talk to him.

My oldest daughter--the one I've written about with her ongoing battle with panic/anxiety disorder--had positives. She made it to our church in June to make the dough for the Hungarian Festival. That was where she failed last year before her big "fall from grace." So it was important to her to make it and actually do the work. And she did! Her next hurdle was making it two towns over for our county fair. She is one of the division chairs and last year never made it, leaving all her work for her co-chair (younger brother) and the rest of us. She worked on getting to the fairgrounds in steps over several weeks. Finally entry day came and she took my car and actually made it there. She was ready to bolt early on but different people kept seeing her and excitedly talking to her and she wound up staying over eight hours! She was wiped out but happy. And she made it back the next morning to set her displays and came back the following Saturday for several hours as well. She's been taking her meds regularly and seeing her counseling staff. So that's good. I'd like to see her make more progress (like come out of her room more often and do something other than play games on her tablet) but I'll pick my battles. Today is her birthday and at this time last year, I wasn't sure we would see her reach another birthday so it's a good day to celebrate.

Of the rest of my kids my oldest son is at a new job and enjoying it. Other than finding a love interest (which I know he would love to do), all is good in his world. My younger son also started a new job. He works in the kitchen three nights a week for a local eatery, is bouncer at a local tavern another couple nights and stayed at his other job (a local sandwich shop) for Saturdays. I barely see him. My middle daughter needs to change jobs; she is quite unhappy where she is at. She's trying to start a cottage business but having a hard time getting information from the county health department on regulations. My younger daughter is meeting young men through dating apps. One she met over the summer quite literally mentally abused her. She ended it with him (thankfully) but the stress is slow to leave. She also is working again with the local high school marching band (color guard instructor) and this year's kids are drama-filled which is also stressing her.

As you may have obviously guessed, I worry about my kids, which adds to my stress.

My positive for the summer was I finished a knitted lace, circular shawl that I entered into the county fair. I was thrilled when it was named Best in Show. More of an honor, the daughter (current chair for knit/crochet) of my fellow judge (who passed away last year during the fair from cancer) is the one that came and got me and walked me to my entry to see the ribbon. Her mom and I started with the fair together almost 40 years ago as judges and we both became chairs and fast friends. 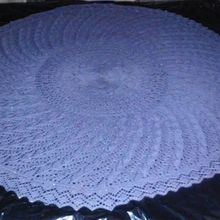 So, my low for last night that brought me back here. Generally, I need to watch what I say to/around my husband. He often takes my words out of context and uses them against me in some way. I know this is the disease process but it doesn't always make it easier. Our youngest came out of the kitchen/into the front room with a can of Monster. My husband looked at her and snapped that she shouldn't be drinking it. The little one takes no guff and gave it back to him, telling him HE can't drink it but she can and will. I asked him why shouldn't she be drinking it and he glared at me. I then asked him if he knew WHAT it was. Well, that started him yelling at me that I'm always picking on him and he can't even have fun (mind you, his comments were said to her in a snapping tone not a fun, smiling way). I stopped talking then. So same daughter ran out to the local grocery store to grab something for herself for dinner and when she came back, showed me that she grabbed a little ice cream treat for herself and her older sister (Heather). I told her that was sweet of her. She made her dinner and enjoyed it.

About an hour later he got up, went to the kitchen and came back with one of the ice cream treats in his hand exclaiming, Look what I found! I told him that the younger one had just bought those for herself and her sister. Well, he stomped into the kitchen and threw it in the freezer and came back moping that now he had nothing for dessert. The older daughter told him there was chocolate ice cream in the freezer and he yelled (and stomped his foot like a two-year-old having a tantrum) I HATE CHOCOLATE! (This coming from the man who snuck an entire container of chocolate over four days two weeks ago). I asked him to stop acting like a two-year-old and then told him there was vanilla ice cream in the big freezer if he wanted. Silence.

About a half hour later he gave me the remote for the TV saying he was going to bed. I put on a program I like. He haumpf-ed at me and finally got up to leave. He said good night. I said good night, see you in the morning. His response? Maybe... And walked out. I called out, What do you mean? And got no answer.

I went upstairs and confronted him in the bedroom about that comment. I told him it was his daughter's birthday the next day and that wasn't a funny joke. He looked at me and asked Who? I told him which girl's birthday and he snapped that he knew. I told him his comment wasn't funny and that of all people he shouldn't even think of saying something like that for her birthday! (On one of her birthdays, her Sunday School teacher passed away unexpectedly, and then we all know that happened on 9/11/2001. All her progress would be lost and I don't know what she would do if he died on her birthday too.) And I walked out.

I went back downstairs, commented to the younger one, who then went upstairs to use the bathroom, leaving me alone. And I lost it. I was trying to breathe and calm down from that but everything from the last few weeks/months just crashed down on me and I sat there and sobbed - literally sobbed. And I prayed, prayed hard.

And then I stopped. Pulled up my big girl panties, blew my nose, wiped the mascara running down my face and blew my nose some more.

I can't solve anything with tears. They were a chance  to release the stress and frustration but they don't solve things. He woke up this morning--thankfully--and seems to have forgotten last night. He wished Heather a Happy Birthday. I haven't had any phone called from them while I'm a work.

It's another day and another start. 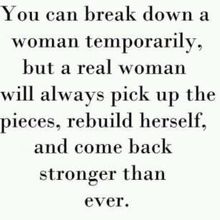 I plan on having a lot of them.