I Just Want to Understand

I Just Want to Understand 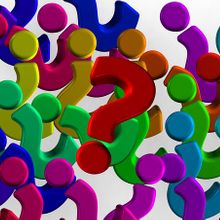 It's human nature to want to know the answers, to know the why's and the why nots, to solve the mysteries. I keep mulling over the course of my friend's cancer. It was three short months from diagnosis to death. She had been having some concerns about her heart and a cough and been to the doctor a few times in the preceding months. Even a chest x-ray just four months earlier was negative. They chalked it up to stress of pending divorce. When she went in May with complaint of difficult breathing, this time x-ray show a mass, CAT scan and biopsy confirmed lung cancer. All other CAT and MRIs showed no spread of the cancer, only in the right lobe and pleura cavity. They told her it was a slow growing cancer and with chemo a 70% to 80% chance of remission.

It didn't turn out that way. It seems it wasn't slow growing and the cancer was atypical. Numerous samples from tissue from different areas were taken at University of Chicago, and they were somewhat perplexed by her cancer. (The oncologist was one of top researchers in the world in lung cancer.) One month after the initial diagnosis she was told the tumors were expanding affecting her heart.

Now the theory about her cancer is that it didn't originate in her lungs. Five years ago, over half of her liver was removed at Northwestern University because she had several large benign tumors. In some cases these benign tumors can become malignant. They think that tumor cells could have escaped and spread to the plural cavity then her lungs. They said the cancer acted more like a bile duct cancer. They said one course of chemo following the liver surgery would have prevented any possible spread. Did they even know that five years ago?  Of course, all this information is second hand, mostly from her family. Which brings me to another issue of doctors and communication…

My friend really like and trusted her primary doctor. She liked the local oncologist and the oncologist from the U of C. One trained under the other and both are nationally respected. They decided to treat her locally, and the U of C doctor would stay involved. But here is the rub. Once in the hospital where she spent half her time during the last three months during four different admissions, she had the hospital's doctors. Sometimes she was in the ICU, sometimes on the oncology floor and sometimes on the surgery floor. She had so many different doctors.

She had one course of chemo in late May. Then none until August (no rush on the slow growing cancer) when they nailed down second biopsy results and got insurance approval for different type chemo. Then three rounds of chemo, three weeks in a row, the last just two days before she died. Was it too late to have a chance to work? Would the chemo have been effective if she got it earlier?

Did she get the all the right info? Was she able to make informed choices? First the oncologist from U of C was out of town, then her local oncologist was on vacation. Were they all these doctors communicating with each other?

Maybe they were, I personally witnessed the nurse of U of C oncologist call my friend while she was in local ER and talked to the oncologist on other line at same time. That night in the ER, the ER doctor ordered IV fluids but luckily an oncologist came in to see her and was there when the nurse was about to start fluids and stopped her. This doctor was up to speed and knew her case, I was impressed with him. My friend had extreme edema and fluids were contraindicated. That admission was when they drain fluid from around her heart.

But during another admission, my friend told me the one doctor she thought was incompetent, she ordered surgery to remove more fluid from her lung and after prep for surgery, the ultrasound showed no fluid build up. I saw her too, she looked like she was 18 years old. I saw a total of eight different doctors while my friend was hospitalized and I wasn't there a majority of the time. (Her dad kept daily vigil and discouraged visitors). The doctor that came in to talk about "treatment options" versus "comfort care" was yet another guy who seemed totally uncomfortable with this discussion. I didn't get to hear the whole thing, he waited for her parents.

I really, really like my doctor. She is sharp, compassionate, thorough and dedicated. She still does hospital rounds. She says, who knows you better than your primary care physician and who do you want there with you when you are at your worst. I would want her. I would trust that she was up to date on my case and the course of action choices. I would trust the information she gave me. I trust that she would be honest with the prognosis.

My son asked me if my friend was at peace in the end. I don't even think she knew she was so close to death. I don't think they were giving her all the information or if they did, based on a couple comments she made I know she didn't believe all the different doctors.

My friend and I barely discussed her illness. She got so sick so fast, she had trouble talking because of difficulty breathing; she was in pain and drowsy from pain killers. I wonder what was going through her mind. She would apologize for not being able to talk. She would literally have to rest between phrases.

I have so many questions and "what ifs", but in the end, she is gone. Will having those answers make any difference? Would it lighten my heart? I doubt it. I like to believe that regardless of the doctors competence or possible incompetence, that the result would have been the same.

Jean,\nI'm so sorry for the loss of your friend. It is so hard to lose a friend so quickly and there seems to always be so many unanswered questions. I still have questions about our foster son and why he died so young. When he was with us, we had no control over his medical care and I was often horrified by the decision for him to have one more surgery. Should I have spoken up more? A friend died of lung cancer - but didn't really die of the cancer, she had a fatal reaction to the chemo. \n\nNow, I am often horrified by the thought that I am the one who has to make medical decisions for my parents. I have had to sign consents to give medications that could possibly have killed my mother. I made the decision to have them go to assisted living. It's not been totally up to me as my dad has been able to talk with me about the decisions, but it's still hard.\n

I'm so glad you wrote this out, Jean.\n\nI was thinking the other day how many have so many unanswered questions after a death. And, especially for your friend, so much happened so quickly. It seems like the race started without any warning which make it so hard to play catch up.\n\nI questioned my mom's care when the bleeding couldn't be stopped. I finally found comfort in the number of doctors involved in her care. I decided that if one doctor was incompetent, she had enough competent doctors to act as checks. In essence, I decided the number of doctors involved created a natural check and balance system.\n\nI think it's an awful kind of torture to be left with questions. I am certain, though, that your friend had no questions about how much you loved her. Your love for her was constant and unconditional. How wonderful that she received that incredible gift from you.