I Missed My Fishing Buddy

I Missed My Fishing Buddy

My husband has been a truck driver since he was 21 and he always identified himself as one with a great deal of pride. He loved telling stories of where he had been, what he had seen, and what he had hauled. He had developed a wonderful camaraderie with the people he worked with from all over British Columbia and there were times we would all meet up for meals when people were in town or we were in their town. For such a big guy, my husband has always been a gentle giant who loved a crowd of friends to sit and laugh with.

When it became clear that his disability would prevent him from ever driving a big truck again he lost his identity. He lost interest in being social, lost interest in being outdoors, and felt that he was worthless. I was worried during all of this. Here was my big, strong husband who was always determined suddenly looking very lost and incredibly sad. We used to spend a lot of time camping, fishing, atving and just exploring the outdoors when we first got together. In the last year or so he lost interest and I lost my fishing buddy.

I am not sure what changed this spring, but he's back with gusto. Maybe it's because he has come to terms with his limitations, maybe it's because he is still determined and refuses to deal with this lying down. When we went on our first ATV ride of the year, we went with a couple we knew and ended up meeting with friends of theirs that we didn't know. At first he was reluctant to meet new people, but once he got over that he had a blast. I think it reminded him that he may have limitations, but he isn't dead. He has spent the entire spring and the better part of this summer looking for things to do on the weekends. Doesn't matter if it is going out in the RV or throwing the fishing rods in the back seat and finding somewhere new to go. I am glad my fishing buddy is back because he's already got tomorrow planned and guess what? I think I'll have to hang up this sign: 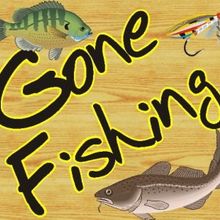 Ahhh.... a disability can take so much--especially an individual's spirit. <a href='http://www.m40.siteground.biz/~caregiv6/members/worriedwife/' rel=\"nofollow\">@worriedwife</a> (Pegi) has written about the adjustments she and her husband have gone through. Amazing what a difference acceptance can make for one's spirit.\r\n\r\nI'm looking forward to hearing a big fish story. :)

I'm glad for you Chris . . . that you have your fishing buddy back! Hoping you're better today! il